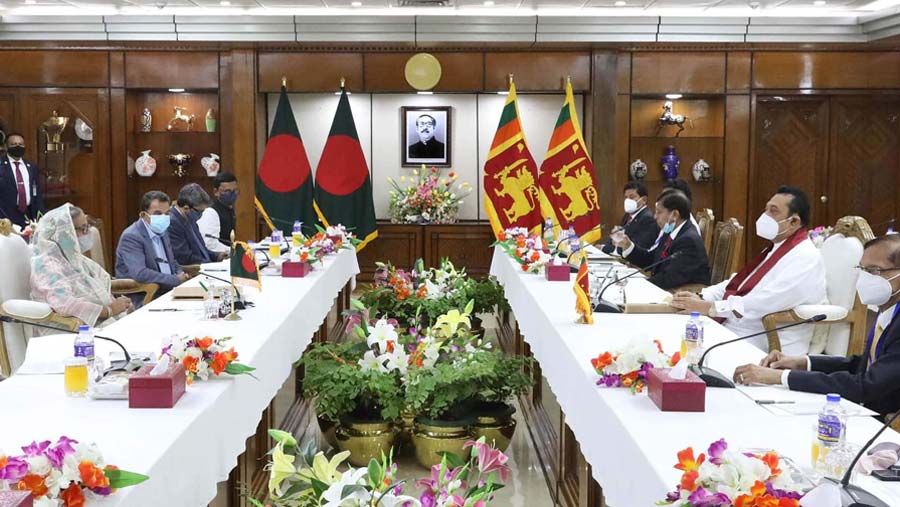 Bangladesh and Sri Lanka on Saturday (Mar 20) agreed to move forward the mutual cooperation and explore new avenues in trade and commerce alongside the existing sectors. The two countries reached the consensus at the official bilateral talks held at the Prime Minister’s Office (PMO) in Dhaka. Prime Minister Sheikh Hasina led the Bangladesh side while her Sri Lankan counterpart Mahinda Rajapaksha led his country in the talks. Prime Minister’s Press Secretary Ihsanul Karim briefed newsmen after the meeting, local media reported.

He said the entire ranges of bilateral, regional and international issues were discussed at the official talks that lasted for nearly an hour. Mentioning that the bilateral trade is far less than its potentials, Prime Minister Sheikh Hasina said the joint feasibility study for a free trade agreement (FTA) has already been done.

“Now, we should go for an early conclusion of FTA,” she said, emphasizing on facilitating greater private sectors participation.

The premier stated that Bangladesh has many products which have high prospects in the Sri Lankan market.

Sheikh Hasina said Bangladesh will be happy to share with Sri Lanka its experiences in agriculture, particularly in rice farming and freshwater fisheries.

“We would like to obtain technical knowhow from Sri Lanka in coastal, aquaculture, marine culture, and deep sea fishing,” she added.

In the education sector, the Prime Minister said, both countries should have more institutionalized cooperation in capacity building, vocational training, and skill development.

Talking about the health sector, she put emphasis on core training of Bangladeshi nurses and other health professionals in Sri Lanka.

“Sri Lanka may benefit immensely by importing our world class pharmaceutical products and medical devices in greater quantities,” she said, noting it would require simplification of Sri Lankan registration procedures.

Bangladesh would be happy to share with Sri Lanka its experiences in emergency response, disaster management, climate adaptation and mitigation, she added.

Ihsanul Karim said that Sheikh Hasina in her concluding remarks described the meeting as fruitful and stressed the need for regular meetings among the existing institutional mechanisms to take forward the relationship.

The PM said, “Both sides should also take immediate action for due implementation and follow up on all bilateral instruments signed so far.”

Mentioning that Bangladesh values its relationship with Sri Lanka, she said the 50th anniversary of the establishment of diplomatic relations with Sri Lanka will be held in the next year.

Sri Lankan PM Mahinda Rajapaksha stated the relations between Bangladesh and Sri Lanka as a close bond of friendship. He invited Sheikh Hasina to visit Sri Lanka next year to celebrate the golden jubilee of the diplomatic relationship of the two countries.

Mahinda Rajapaksha praised the digital Bangladesh transformation and its performance, saying they would be happy to share experiences in agriculture, health and education issues for mutual benefit.

Emphasizing on increased trade and its diversification, he sought more attention to tariff preference and said his country will invest more in the private sector business areas and requested Bangladesh to make repatriation of profits easier. He also lauded Bangladesh’s concept of blue economy and said Sri Lanka is ready to share its experiences to this end.

The Sri Lankan PM said his country is keen to learn from Bangladesh about disaster management. He also praised Bangladesh and the Prime Minister Sheikh Hasina for handling Covid-19 situation successfully.