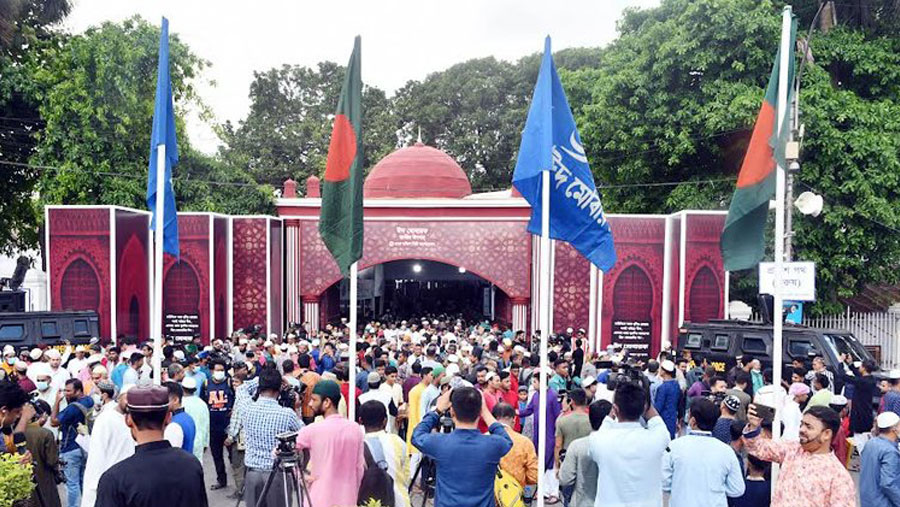 The holy Eid-ul Azha, one of the major religious festivals of the Muslim community, was celebrated today across the country with due solemnity and religious fervor. President Md. Abdul Hamid offered the prayers of Eid-ul-Azha along with his family members and some officials at the Hallway of the Bangabhaban here at 8.30 a.m. maintaining health guidelines and social distancing.

In view of the coronavirus outbreak, the President did not attend the traditional Eid prayers in the capital's National Eidgah ground.

Secretaries concerned to the President Office, only some other key officials and staff attended the Eid prayers.

After the prayers, President Hamid spent his time with his family members at the Presidential palace, local media reported.

Special prayers and munajat were also offered for the welfare, happiness, peace and prosperity of the entire Muslim Ummah and the nation. Khatib of Baitul Mukarram National Mosque Maulana Mufti Ruhul Amin led the main congregation at the National Eidgah under the management of Dhaka South City Corporation.

Worshipers entered the National Eidgah Maidan to join the main congregation of Eid amid tight security.

Like in the previous year, five Eid congregations were held in Baitul Mukarram National Mosque. The first congregation was held at 7 a.m. while second one at 8 a.m., third at 9 a.m., fourth at 10 a.m. and last one at 10:45 a.m.

Special prayers were also offered there seeking continued peace and development of the nation as well as global peace.

After the Eid prayers, the devotees were seen shaking hands and hugging each other.

On the occasion of the Eid-ul-Azha, Prime Minister Sheikh Hasina greeted all Freedom Fighters of the country.  Like other occasions, the premier sent flowers, fruits and sweetmeats to the war-wounded freedom fighters and members of the martyred families at Martyred and War-wounded Freedom Fighters’ Rehabilitation Centre (Muktijoddha Tower-1) at Gaznavi Road in the capital’s Mohammadpur area as a mark of her good wishes for them.

The war-wounded Freedom Fighters and members of the martyred families thanked and expressed gratitude to the Prime Minister for remembering them on every national day and festival like the Independence Day, the Victory Day, Eid and Pahela Boishakh. They also expressed gratitude to the Premier for undertaking massive steps for their rehabilitation including construction of Muktijoddha Tower-1, a 13-storey residential-cum-commercial building in Mohammadpur.

Eid congregation was also arranged at Dhaka University Central Mosque-Masjidul Jamia at 8 am.

After offering Eid prayers, devotees sacrificed animals according to their ability in the hope of attaining infinite grace of Almighty Allah.

Cleaners of Dhaka north and south city corporation started removing the wastes of sacrificial animals from city streets from 2 p.m.

Till evening, cent percent wastes of sacrificial animals were removed from 17 wards under DSCC and 11 wards under DNCC.

Bangladesh Awami League General Secretary Obaidul Quader extended greetings to the countrymen on behalf of the party on Eid-ul-Azha.

“We are celebrating Eid at a time when the people of a region in the country are facing colossal losses due to flood. Coronavirus infection rate is also on the rising trend,” he told a press conference at his official residence here.

Quader, also Road Transport and Bridges Minister, said in this context all should extend helping hands to flood-hit people as well as remain alert in containing coronavirus infection.

On Jul 7, the government issued a circular with eight instructions, including maintaining the health rules, during the prayers.

The guidelines included no illuminating will be allowed on the occasion of the Eid-ul-Azha celebrations.

Special security measures were taken in the capital and elsewhere across the country to avert any untoward situation during the celebration of Eid-ul-Azha.