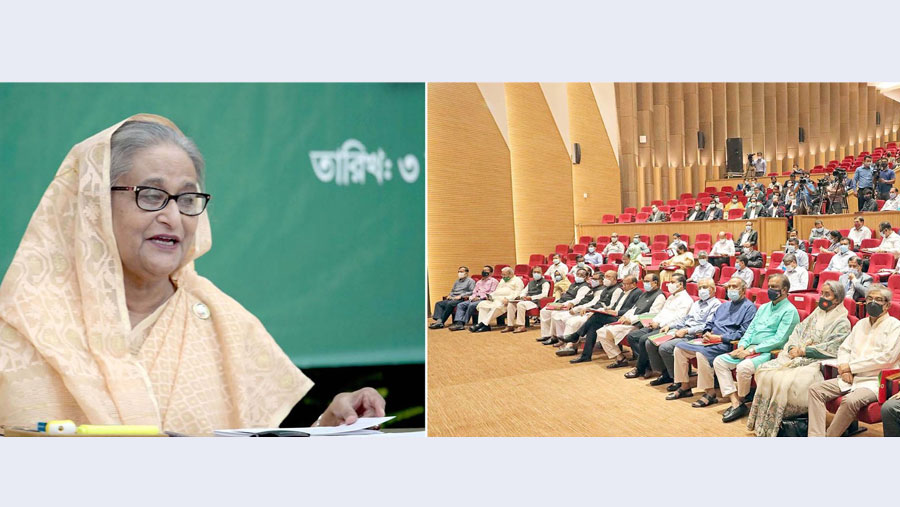 Prime Minister Sheikh Hasina on Sunday (Jul 3) said her government would materialise the electoral pledges and thus give the people an improved and better life, urging all to work together to build a prosperous and developed country maintaining continuation of ongoing development.

"We want to implement the electoral pledges, based on which we assumed power," she said.

She was addressing a function at the Osmani Memorial Auditorium in city to mark signing of the Annual Performance Agreement (APA) for FY 2022-23 by the ministries and divisions. She joined the function virtually from her official Ganabhaban residence in Dhaka, local media reported.

The PM said the government has transformed Bangladesh into a developing country in 2021 while the nation celebrated twin mega events, birth centenary of Father of the Nation Bangabandhu Sheikh Mujibur Rahman and 50 years of the country's Liberation War, in accordance with the Awami League's election manifesto of 2008.

She said her government is now working tirelessly to change the fate of the countrymen after giving them an improved and better life by making Bangladesh into a developed and prosperous country free from poverty and hunger by 2041.

The government has been implementing a perspective plan for 2021-2041 to pursue the target, she added.

Sheikh Hasina, also President of the Awami League, said her party men do politics as the public servant for the welfare of the people instead of making their own fortunes.

"We do politics. We have a political party and take part in the election. We announce an electoral manifesto in which we give an outline of how we progress the country," she said.

The PM said her government has taken all the development plans aimed at changing the fates of the grassroots people.

"We have changed the living standard of the grassroots people a lot since we assumed power continuously from 2009.

"The people earlier used to want only food. Now their demands have changed which indicates the sign of development," she said.

The Father of the Nation had taken various programmes that included reaching the power to grassroots people to change their fortune by giving the countrymen a standard life, she said.

"But, unfortunately he (Bangabandhu) had not been able to do it (as he along with most of his family members were assassinated on Aug 15, 1975) for which Bangladesh had gone backward," she added.

Upon assuming power in 1996, she said that the Awami League government had implemented different programmes to change the fate of the people.

The premier added: "We have tried to make rapid growth of the country after assuming office in 2009. We have introduced the APA system from FY 2014-2015 to do the development work accordingly. In continuation of that, the agreement was signed this year for the ninth time."

Greeting all who got the awards for successful implementation of the APA and exercise of integrity in their respective organisations, the premier said the country is going through a critical juncture due to double blows of the Coronavirus and Russia-Ukraine war and the countries like Bangladesh are the worst sufferers.

"Despite the facts, we have been able to march the country towards development due to the sincere works of you all," she added.

Sheikh Hasina asked the government officials to ensure maximum utilisation of the domestic resources to make the country a developed and prosperous one.

At the function, senior secretaries and secretaries of the ministries and divisions handed over the APA to the prime minister after signing those for FY 2022-23.

The Information and Communication Technology Division has secured the first position while the Secondary and Higher Secondary Division and Agriculture Ministry obtained second and third positions respectively in APA implementation and received each a crest and an honorary letter.

The Food Ministry, Roads and Highway Division and Civil Aviation and Tourism Ministry received the first, second and third positions, in exercising the integrity.

On behalf of the PM, Liberation War Affairs Minister AKM Mozammel Haque received the APAs from secretaries of the ministries and divisions and handed over the award to the recipients.

The PM said the decision of constructing the Padma Bridge with own finance has increased Bangladesh's honour and dignity in the world and Bangalees don't need to move keeping head down.

On the Padma Bridge issue, she said the vested quarters made the lives of her family members, then minister, adviser and secretary miserable, bringing false allegations against them.

But, she said she knew that no corruption had occurred in the Padma Bridge project and at one stage, she announced to construct the bridge with self finance.

The PM said that many even could not believe that Bangladesh could build the bridge with its own resources, which is the symbol of victory and honour for Bangladesh.

"We have to move with confidence that yes we can do," she said, adding, "Not only the developed countries can do, we also can do. Inshaallah, we will be able to establish ourselves as a developed country and that is our belief."

The premier asked the officials concerned to develop the wholesale markets at four areas, including Amin Bazar, Mohakhali, Sayeedabad/Kanchpur and Postogola/Keraniganj for better management of goods.

She stressed the need for setting up ring roads to avoid traffic snarl in Dhaka.

About the flood, the prime minister mentioned that Bangladesh is a country of natural calamity and people would have to live with these.

She also reiterated her call to maintain health protocols accordingly against the backdrop of fresh surge of the Covid-19.