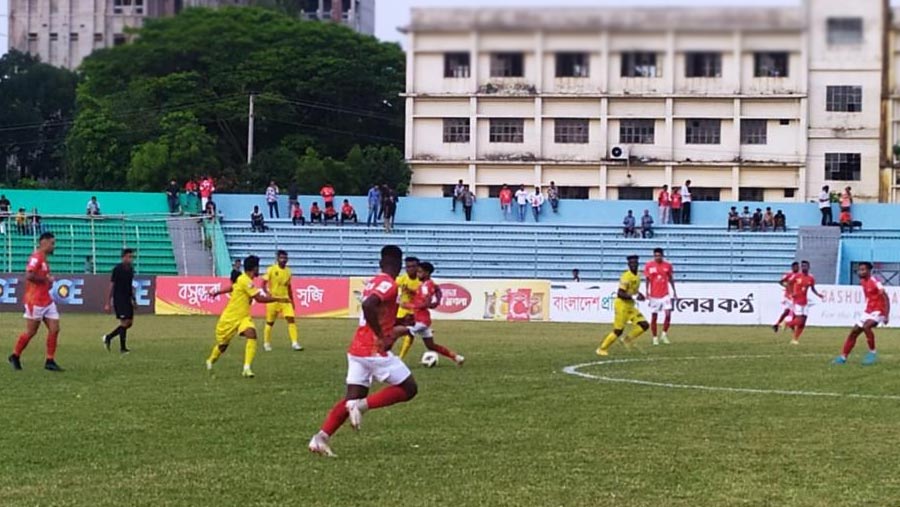 Despite the win, Sheikh Russel remained in the eighth position in the 12-team point table as they currently have 18 points while Sheikh Jamal, which only suffered their second defeat in the ongoing league, remained at third with their previous credit of 30 points.

At the Bashundhara Sports Complex, hosts Sheikh Russel opened their account in the 24th minute when Hemanta, who recently recovered from an injury, scored with a smart grounder, off a cutback from Nigerian forward Ismahil Akinade.

Sheikh Jamal wasted two chances in the 10th and 36th minute of the game but finally, they levelled the margin when Otabek scored with a left-footer, off a long cross from Solomon in the 42nd minute.

Charles Didier scored with a sloppy first touch while Hemanta sent him the ball inside the box in the added time of the first half.

In the second half, both sides created several chances from counterattacks and set pieces but failed to convert any into a goal.

Sheikh Russel midfielder Rabbi, who came in the place of Ghanian forward Richard Gadze, sealed the fate of the match in the 87th minute.

“We did a lot of work for the development of the players (during the break). Because of that, we were able to reduce our mistakes and could use our chances in the proper ways,” Sheikh Russel head coach Zulfiker Mahmud Mintu told the reporters after the match.

In Munshiganj, Kings’ Brazilian midfielder Miguel Figueira Damasceno and forward Robson Azevedo da Silva scored one each in the 35th and 38th minute respectively to complete the victory.

In the game, Rahamatganj were reduced to 10-man when their goalkeeper Ziaur Rahman conceded a straight red card for handball in the 34th minute.

After the win, Kings consolidated the top slot with 41 points while Rahamatganj remained in the10th position with their previous credit of 10 points.

Meanwhile, Dhaka Abahani Limited will lock horns against Mohammedan Sporting Club in the season’s second Dhaka Derby at the Shaheed Dhirendranath Stadium in Cumilla on Wednesday (Jun 22). Dhaka Abahani won by a solitary margin in the first meeting on Feb 23.

Police Football Club will play against Uttar Baridhara Club in the day’s other match at the Muktijuddho Sriti Stadium in Rajshahi.

Both the matches kick off at 4 p.m.