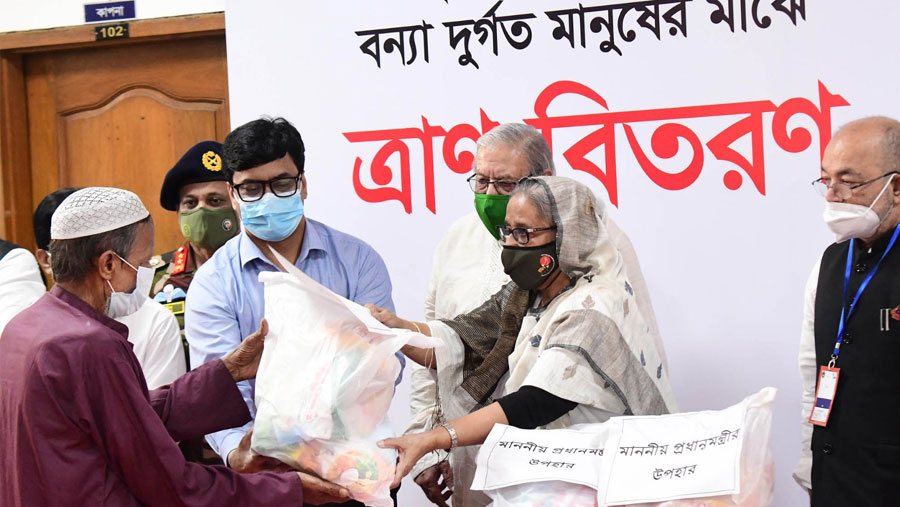 Prime Minister Sheikh Hasina on Tuesday (Jun 21) said the Bangladesh Awami League always stands beside the people during any disaster.

"In government or opposition, wherever Awami League remains, its leaders and activists always stand beside the countrymen and work for them. During cyclone, flood or any other disaster, we always stay beside people and will continue assistance to people" she said.

The premier said this at a view exchange meeting on the review of recent flood situation in Sylhet Division and rehabilitation of the affected people at Sylhet Circuit house.

She said that during any disaster, Awami League reaches the affected people fast and quickly than others. "And, Awami League will continue its work for the people," she added.

Sheikh Hasina, also the President of Awami League, extended her gratitude to the local administration, army and leaders and activists of her party and its associate bodies who worked to rescue marooned people and distribute relief risking lives.

She said Awami League leaders and activists went to the remote areas, where many couldn't reach, and sent pictures of those areas to me what helped ease the rescue process.

"I sent those pictures to the army chief, our office, divisional office... so they have been able to rescue the people," the premier said.

Sylhet Divisional Commissioner and General Officer Commanding of Sylhet Cantonment made brief presentations on the flood and its damage.

Besides, over 300 medical teams are working to treat the flood victims while 1307 metric tones of foodstuffs alongside 24,000 packets of dry food and Tk 2.45 crore cash were distributed.

On the other hand, 74,000 hectors of land went under water while 40,000 ponds and hatcheries are damaged due to flood water which incurred a loss of estimated Tk 142 crore.

At the event, Deputy Commissioner of Sunamganj handed over a framed-picture of the baby boy "Plabon"  who was named by the Prime Minister Sheikh Hasina.

The baby born in the shelter of DC office in Sunamganj and the Premier herself named the baby born at 10 a.m. on Jun 18.

Jamila Khatun, a resident of Mallikpur area of the municipal town, went out from home with labor pain. But, they got stuck as the road went under water. Later, she was brought to the shelter of DC office in Sunamganj by the administration on a small boat where the baby born.

She has given a set of directives to all concerned particularly the field level administration to take prompt measures to ease sufferings of the flood affected people.

Spelling out experiences during 1998 flooding, the PM said steps should be taken to arrange dry foods for the flood-hit people as they can easily preserve and eat those for several days.

She also advised the flood affected people to somehow harvest rainwater as it has been raining cats and dogs in the region.

She asked all concerned to distribute an adequate number of water purifying tablets, required medicines and saline to the flood-hit people.

The PM stressed the need for constructing elevated ways instead of roads filling soil in the haor areas like Sylhet, Sunamganj and Kishoreganj for smooth transportation of the people and goods during such disasters alongside ensuring their durability.

About dredging of the Kushiara River, she said that she favours capital dredging in a river for a single time and maintenance dredging for every year to ensure their navigability.

The premier said once the greater Sylhet had a number of beels (water bodies) and there were drains in front of almost every house to hold water, but unfortunately, there is now no such beel and drain here.

These beels and drains are now being replaced with big buildings and establishments due to the development spree in Sylhet, she said, adding that the situation of Mymensingh is similar to Sylhet.

"We have to carry out our development activities keeping that in mind," she said.

The premier asked the authorities concerned to take measures to make sure that the water cannot enter the food godowns and food can be transported easily from the storehouses during the flood.

About power cuts during the flood, she said the electricity connection is usually snapped during storms and flooding mainly to avoid any new disaster like deaths in electrocution.

The PM asked the administration to clean the entire flood affected areas of Sylhet region by bleaching powder to protect the people from infectious diseases like diarrhea and fever after the water started receding.

She said she had already instructed the Health Ministry to this end.

The middle part of the country might experience flooding in the Bangla month of Shraban while the southern part in Bhadra which usually occurs, she mentioned.

The premier said, "The entire Sylhet region has experienced flooding three times in a row. This flood is not the last one. So, we should remain always prepared to face floods."

She asked the authorities concerned to reactivate the land phone lines to ensure uninterrupted communications during the flood.

The premier greeted the district administrations, armed forces and the leaders and activists of the Awami League for doing commendable jobs by reaching relief items to hard-to-reach flood affected areas.

Sheikh Hasina said she had a meeting with the National Disaster Management Council on Monday last and she has given all the necessary directives to tackle the flood.

Earlier, she witnessed the flood situation of Sylhet, Netrokona and Sunamganj districts as the helicopter carrying her hovered over the affected areas maintaining "low fly mode".

The PM also handed over assistance to deputy commissioners of Sylhet and Sunamganj from her Relief and Welfare Fund and later distributed relief items to some affected people.