Padma Bridge to be blessing for easier communication during flood, says PM 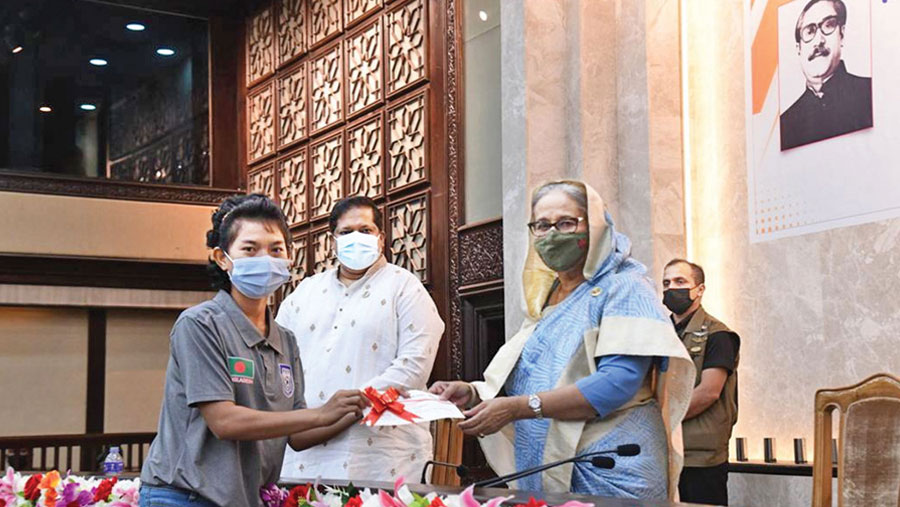 Prime Minister Sheikh Hasina on Sunday (Jun 19) hoped that the Padma Bridge would be a blessing for the nation for easier communication in the wake of flood, as the government is set to inaugurate it on Jun 25.

"After the opening of the Padma Bridge, I hope, InshaAllah, it would be a blessing as uninterrupted communication with the Southern region will be ensured," she said.

The premier made this optimism while addressing a reception ceremony of sports-persons at Shapla Hall in the Prime Minister's Office in Dhaka as the chief guest, local media reported.

Sheikh Hasina said, "The Padma Bridge will create a vast opportunity for us to transport goods, tackle floods, stand beside people and provide them assistance."

She added, "I think we are going to open the (Padma) bridge at a time when flood began on one side, but it may also go to the Southern region."

Sheikh Hasina said during the flood, river crossing becomes difficult as it gets extra current and appears as furious and that is why people get stuck on the river bank.

In this connection, she also shared her own experiences of being stuck in Tungipara during the flood of 1988.

The premier said that if there would have been a bridge over the Padma River, she could have traveled to Dhaka instead of being stuck.

"So, after the opening (Padma Bridge), all types of works such as providing assistance, medicine etc to people could be done easily during the flood," she said.

Recalling the time of inauguration of Bangabandhu Bridge on the River Jamuna, the PM said there was a severe and prolonged flood in 1998 in the country.

At that time, the bridge connected the Northern region with other parts of the country, she said.

She added: "As I opened the Bangabandhu Bridge, goods from the region were transported easily to the other areas during the flood that had helped tackle floods in an easier way."

To this end, she also remembered that international organizations at that time predicted over two crore of people would die because of the flood, but, "I replied that we won’t let anybody die and no person died".

She added, "As I opened the (Bangabandhu) bridge, we were able to tackle the flood easily."

The PM also recalled that the southern region had received huge support from the Northern region at that time.

In the reception ceremony, financial honorariums were provided to a total of 88 sports-persons, including 33 members of the SAFF-2021 Champion Women U-19 National Football Team.

At the outset of the function, a video documentary on the three categories of sports teams was screened.