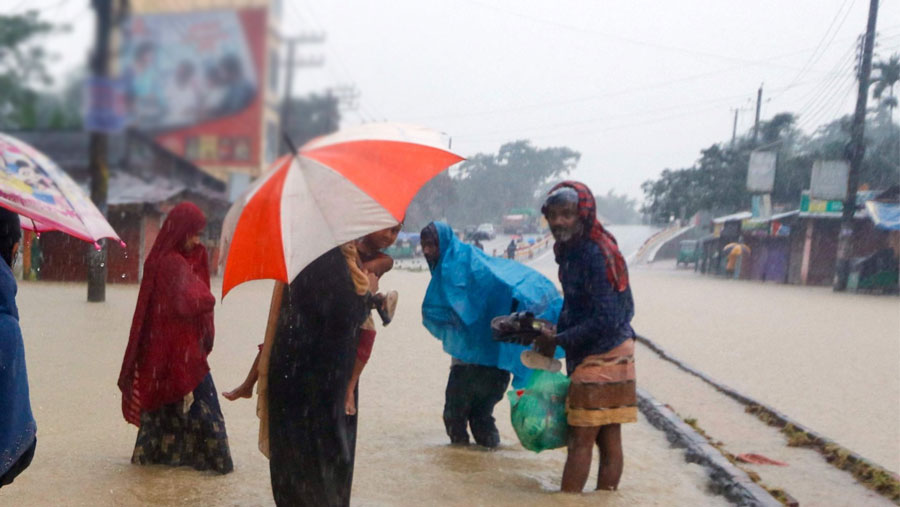 The flood situation in Sylhet and Sunamganj districts has worsened further because of constant heavy rain and onrush of water from the hills. At least 40 lakh people are marooned and 3 lakh are facing electricity outage in those districts, local media reported citing officials.

All the upazilas and half of Sylhet city, and all upazilas and municipalities of Sunamganj district, the Sylhet-Sunamganj highway and the Sylhet-Bholaganj Bangabandhu Sheikh Mujibur Rahman highway are already submerged.

The Meteorological Department has forecast heavy to very heavy rain in the next 48 hours.

The power supply system has been cut off at Kumargaon station, one of the power substations of Sylhet, around 12 p.m. on Saturday (Jun 18).

The army, fire service and city corporation started working jointly to keep the power center operational from Friday noon as the water level inside the station started to rise from Thursday night. A dam was built to protect the station but it eventually sank due to the rising water.

Abdul Quader, chief engineer of the power sales and distribution department in Sylhet, said, "The sub-station has been shut down for the time being due to rising water... But we are trying to get it back on track as soon as possible."

Palli Bidyut Samiti sources said, about three lakh customers in Sylhet and Sunamganj are facing power outage due to the flood.

Due to shut-down of electricity in Sunamganj for the last two days, the mobile network system has also broken down.

Mohammad Abdul Qadir, Chief Engineer, Power Development Board, Sylhet, said, "In many areas, power transmission lines and substations have sunk. Power supply to Sylhet and Sunamganj districts has been cut off as flood water entered the 132/33 KV grid substation in Kumargaon."

The power outage has soared the crisis of candles and kerosene in the areas without electricity. Prices have also gone up in many places.

To rescue people trapped in flood-hit areas in Sylhet, 10 platoons of army and six medical teams have been working in Sylhet and Sunamganj from Friday afternoon.

Meanwhile, the Bangladesh army, navy and coast guard, who have joined the local administration in relief works, are working to move the stranded people to safe places as thousands of residents in many low-lying areas are still stranded with children and aged family members.

Besides, thousands of people have been inundated in the northern districts of Rangpur and Kurigram due to onrush from upstream India to the Teesta River and heavy seasonal rains.