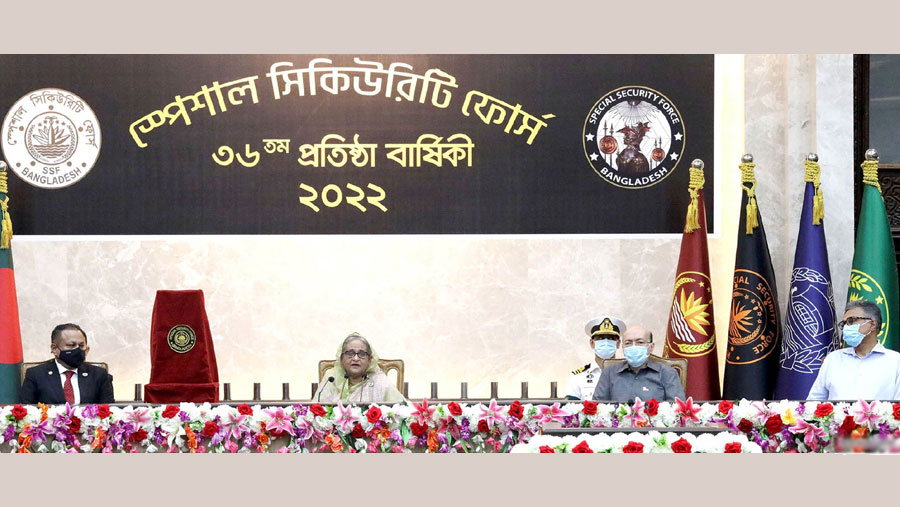 Prime Minister Sheikh Hasina on Wednesday (Jun 15) asked all security forces including the armed forces to remain alert, saying the people who opposed Padma Bridge construction are out to do something destructive, so the bridge’s grand opening couldn’t take place on Jun 25.

“We have constructed the Padma Bridge taking a huge challenge. The people who opposed it have a target. We have got some information that such an incident can be made that we can’t open the bridge on June 25 next. But we don’t know what they will do exactly,” she said.

The PM asked the chiefs of the three services and police, Border Guard Bangladesh (BGB), Rapid Action Battalion (RAB) and Ansar personnel who were present in the programme to stay alert in safeguarding the key point installations such as the Rooppur Power Plant, metro rail and tunnel under the Karnaphuli River.

She said, “I would like to tell you all who are present here to stay alert”.

Sheikh Hasina said the World Bank stopped its funding to construct the Padma Bridge because of provocation of Dr Muhammad Yunus and his friend Hillary Clinton.

Immediately after the halt of the World Bank funding, she said that she had announced plans to build the bridge with own finance.

“And we’ve done it with our own funding despite many people thought that we could not do it,” she said.

She questioned: “How can the fire originated from different places?”

Turning to fire at rail, the PM mentioned that the fire originated from down near to wheels, saying, “How can it happen?”

She however greeted all the security forces including armed forces, police, RAB, BGB, and Ansar for their role in containing the militancy and terrorism in the country which was created during the BNP-Jamaat alliance government.

“We have to remain alert all the times, keeping in mind that attempts are being made to carry out various (untoward) incidents whenever the county marches towards prosperity,” she said.

The PM said that the technology has opened the new door of development and at the same time the people who are involved in various criminal acts, have also been using the technology in their activities.

“So, we have to take all types of measures bearing those in mind,” she stated.

The PM noted her government is building the SSF and other forces with the knowledge of technology as they can compete with the modern world.

She said: “We have to move ahead maintaining the world standard as we can stamp out militancy and terrorism.”

She also said the government is procuring necessary equipment for the force and imparting timely training to its personnel.

The PM greeted the SSF personnel for their contribution to the twin mega celebrations marking the golden jubilee of Bangladesh’s independence and the 101st birth anniversary of the Father of the Nation from March 17 to 26 last year by ensuring security and maintaining the due health protocol amid the coronavirus pandemic.

She said all the heads of the governments and states who received services from the SSF have expressed their satisfaction and highly praised their activities.

The PM however asked the SSF personnel to remain alert so that she isn’t got isolated from the mass people.

“I work for people... if we get detached from the people for whom we do politics then our lives will become meaningless,” she said.

Sheikh Hasina also asked the SSF personnel to maintain professionalism, discipline and rules along with coordinating between the people’s desires and their duties.

She reiterated her call to all the citizens to maintain the health protocol accordingly as the trend of Coronavirus infection is rising, elaborating her government efforts to check the lethal virus and roll out the country’s economy.

A video documentary on the SSF activities was also screened at the function.