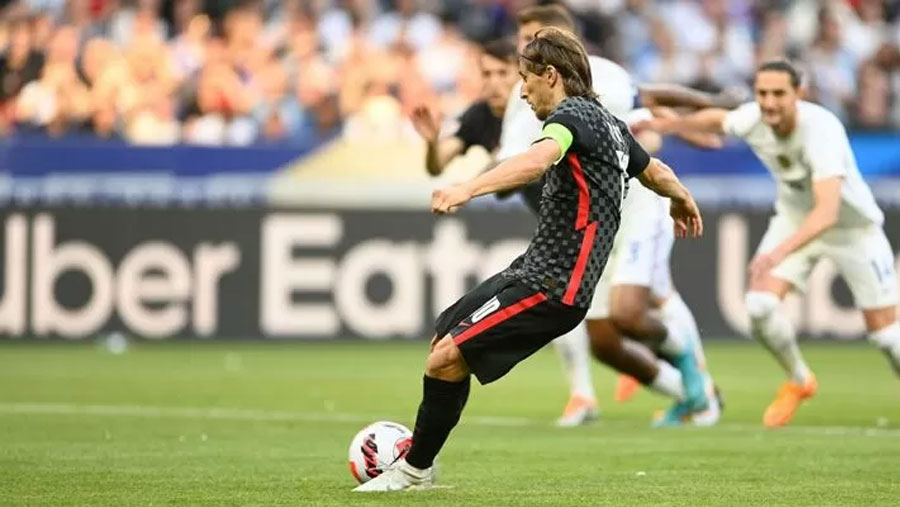 Luka Modric's early penalty gave Croatia a 1-0 win over off-form France in Paris on Monday (Jun 13) as the World Cup holders finished their June run of UEFA Nations League matches without a victory in four outings.

Holders France failed to qualify for the final four of the Nations League when they slumped to a 1-0 defeat at home to Croatia as they stayed winless in the competition on Monday (Jun 13).

The world champions, who have now lost two and drawn two, are bottom of Group 1 on two points, five adrift of Croatia who prevailed thanks to an early Luka Modric penalty.

Denmark beat Austria 2-0 in Copenhagen to stay top on nine points and cannot be caught by France, who are in danger of being relegated, with two games left in the group. Austria are third on four points.

France coach Didier Deschamps reshuffled his team again as he looked to rest players at the end of the season and in all four matches this month never fielded the best possible lineup.

Croatia grabbed the early lead after five minutes when Modric converted a penalty after Ibrahima Konate fouled Ante Budimir. It was Modric’s 22nd goal in 152 games for Croatia.

Kylian Mbappe had two opportunitites but it was the visitors who threatened most in the 17th minute through Josip Brekalo.

Deschamps made two changes at halftime, bringing in Aurelien Tchouameni for Boubacar Kamara in midfield and Benjamin Pavard for Jules Kounde on the right flank of the defence.

Mbappe had another couple of chances but Ivica Ivusic saved comfortably as Croatia controlled the pace of the game. Antoine Griezmann replaced Matteo Guendouzi with 10 minutes left in a last-ditch attempt by Deschamps to salvage a point.

But it proved in vain as France failed to score for the first time after netting in their 23 previous games.

“It was a difficult month of June in terms of results. We did not have the energy and the strength against teams who had more than us,” said Deschamps.

Jonas Wind opened the scoring for Denmark against Austria in the 21st minute and Andreas Skov Olsen netted the second with a cool side-footed finish after Wind found him in the box with a clever pass nine minutes before the break.

Denmark midfielder Christian Eriksen received a raucous ovation when he came on in the second half a year and a day after collapsing on the Parken pitch due to a heart problem in a Euro 2020 group game against Finland and he almost scored with an 87th-minute shot that was palmed on to the post.

In group B2, Israel remain top after twice fighting back to draw 2-2 with Iceland in Reykjavik. Daniel Gretarsson’s own goal cancelled out Jon Dagur Thorsteinsson’s early header and after the hosts regained the lead through Thorir Johann Helgason, Dor Peretz headed Israel’s equaliser.

Kazakhstan extended their unbeaten start to the campaign to four matches as they won 2-1 against Slovakia in Astana to move four points clear at the top of group C3.