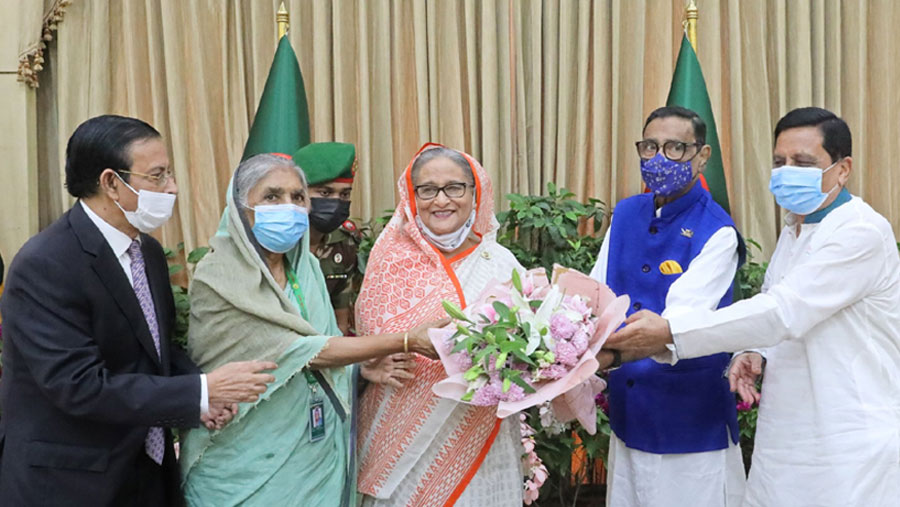 Prime Minister Sheikh Hasina on Saturday (Jun 11) raised the question why some people of the country can't accept any development and achievement of Bangladesh.

She posed those questions while leaders of Awami League and its associated bodies greeted her at the Ganabhaban, marking the 14th anniversary of Awami League President and Prime Minister Sheikh Hasina's release from prison,  local media reported.

The premier said when many developed countries saw negative growth Bangladesh could attain over five percent GDP growth during the pandemic as the Awami League is in power.

"We've given a budget for fiscal year 2022-23. When many developed countries are having negative GDP growth, Bangladesh maintained a growth of over five percent," she said.

On this day in 2008, Sheikh Hasina was released from the special sub-jail set up on the premises of the Jatiyo Sangsad (Parliament) Building after staying captive there for nearly 11 months.

The Awami League president was arrested from her Sudha Sadan residence at Dhanmondi on Jul 16, 2007 during the military-backed caretaker government, which assumed power through the political changeover of 1/11 in 2007.

The PM said Awami League has to step forward defying all odds and hurdles, as a vested interested group is always there to pull back Awami League and Sheikh Hasina so that they can't assume power.

Referring to the scenarios before the 2001 national election, Sheikh Hasina said Awami League does politics with an ideology, which has to be kept in the mind of every leader and activist, and that is why it can't hand over the country to anyone for the sake of any greed.

"We can't hand over the country to anyone for the sake of any self-indulgence as the leaders and activists of Awami League have sacrificed their lives and spent years after years in jail only for Bangladesh's betterment," she added.

The Awami League President said whenever she was arrested she sent letters to the people, and leaders and activists of Awami League giving them directives.

She recalled that in 1983 she was arrested after her return to the country and at that time she was taken to the DGFI office.

"I never bowed down to anyone and never begged from anyone. I got the lesson from my father and family not to bow to anything," she said, adding: "I've protested repeatedly in all adverse situations, even in the face of death."

Sheikh Hasina said leaders and activists of Awami League always choose the right path. "I saw it during the time of my father, Bangabandhu Sheikh Mujibur Rahman, and I myself also witnessed it (during the regime of the caretaker government after 2007)."

She recalled that the caretaker government was compelled to free her due to the movement and pressure from her party.

They became surprised when they saw that Awami League collected 25 lakh signatures in just 15 days, she said.

"It was only possible because of Awami League, and none can do it," she said, adding, "This is Awami League and people are our strength."

In this connection, Sheikh Hasina mentioned that people are not the strength in case of the BNP as their birth happened through the power of a military dictator and its beneficiaries of power.

The PM said BNP is not the party of mass people and that is why there can't be any comparison between Awami League and BNP.

Regarding the propaganda by a section of people who are terming the 2018 election as a voter-less poll, she said it's not sound good in mouths of those who are involved with vote rigging and assumed power through vote rigging.

As the BNP is talking about democracy, she questioned whether BNP was born through the practice of democratic system.

The premier said that Awami League government has brought democracy back to the country and made Bangladesh stable although BNP has tried to make the country unstable using Hefazat-e-Islam as well as creating militancy and "Bangla Bhai".

"Awami League government has brought the country back from that situation and carried out economic development. But, they (BNP) don't feel good," she added.

Sheikh Hasina said Bangladesh witnessed a peaceful handover of power for only one time and that was done by Awami League in 2001, but people, administration, police and armed forces of the country as well as leaders and activists of Awami League had to pay a huge cost for it.

She said during the 2001-2006 regime, the then BNP-Jamaat alliance had made the country champion across the globe five times in a row.

Recalling her jail days during the army-backed caretaker government, Sheikh Hasina said that she noted down how the country will be governed and how the party will be run.

"I noted down how we will develop the country, as a result there is electricity connection now in every house," she said.

Slamming the critics of Bangladesh's achievements, she said this section of people can't accept the country's development.

"I do not know why they are so mean-minded and why they have such a poor mentality," she said.

The head of government said that the government has provided Covid-19 vaccines free of cost to the people. "We know how to do the welfare of the people," she said.

In this regard she said that defying heavy international obstacles the government constructed the Padma Bridge with its own resources.

"The Father of the Nation liberated the country, this independence can't go in vein, we will do our job, we will change the fate of the mass people – no matter who says what," she said.

Sheikh Hasina also said that the government has formulated Delta Plan 2100 for the future generations so that they could get a prosperous life generation after generation.