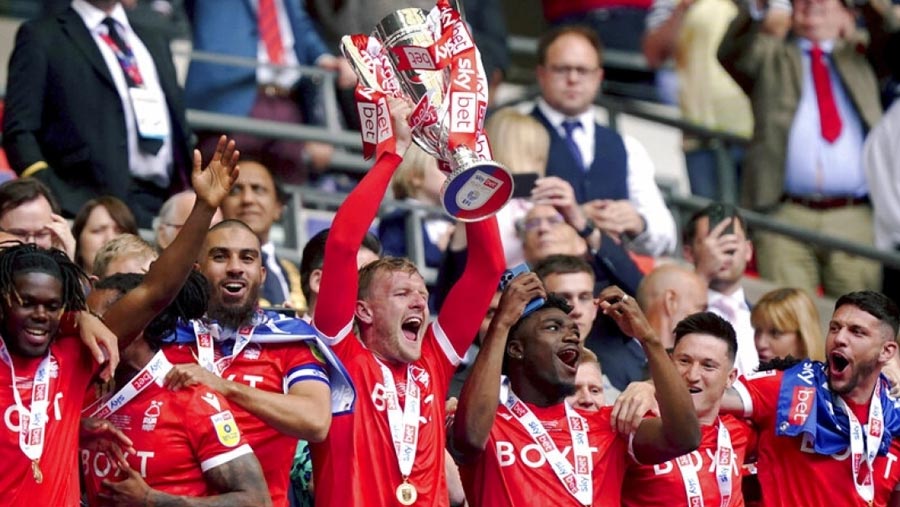 Nottingham Forest secured promotion back to the English Premier League after 23 years with a 1-0 win against Huddersfield Town. Playing at the Wembley stadium, Levi Colwill's own goal in the 43rd minute sent Nottingham Forest into the top flight of the English football. The Reds joined the Championship title winner Fulham F.C. and second-place finisher A.F.C. Bournemouth as the other promoted club.

Nottingham Forest have ended their 23-year exile from the Premier League with a 1-0 win over Huddersfield Town in the Championship play-off final on Sunday (May 29).

No team has had such a long period of time between two seasons in the competition, and Forest are finally back after Levi Colwill's decisive own goal at Wembley Stadium. Promotion completes a remarkable turnaround for the club and head coach Steve Cooper.

This time last year Cooper was on the losing side at Wembley as his Swansea City side were beaten by Brentford in the 2020/21 Championship play-off final.

Cooper left Swansea that summer and when he took charge of Forest in September 2021, they were bottom of the Championship.

Since then, his side have acquired the most points of any Championship team, climbing to a fourth-place finish. Key to Forest's incredible rise has been the form of Wales winger Brennan Johnson.

The 21-year-old has scored 19 Championship goals this season, with 13 of those coming in 2022, and he struck in both legs of the semi-final playoff victory over Sheffield United.

The promotion also means a Premier League return for defender Steve Cook, who spent five seasons in the competition with AFC Bournemouth.

This will be Forest's sixth season in the Premier League, with their best campaign coming in 1994/95 when they finished third under Frank Clark.

The Reds join Championship winners Fulham and runners-up AFC Bournemouth as the other promoted sides. Forest fans can now look forward to finding out who their side will play next season when the fixtures for the 2022/23 campaign are revealed on Thursday (Jun 16).

The new season will kick off on Aug 6.