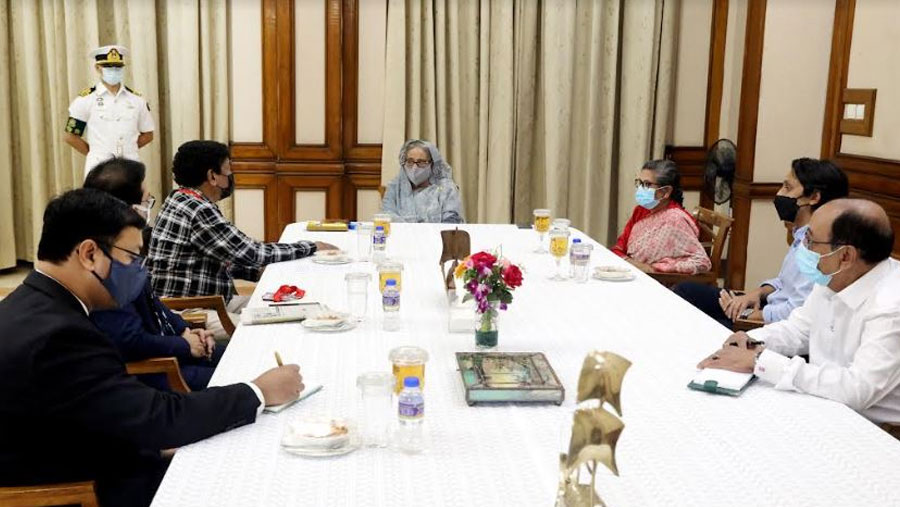 After the meeting, the PM's Press Secretary Ihsanul Karim said that they discussed on the documentary film titled ‘Kolkatai Bangabandhu’ (Bangabandhu in Kolkata) being made by Goutam Ghosh on the life of Bangabandhu during his stay in Kolkata as well as his struggles in political carrier.

Father of the Nation’s youngest daughter Sheikh Rehana and his grandson Radwan Mujib Siddiq were present during the time.

Sheikh Hasina and Sheikh Rehana highlighted outline of the documentary before Goutam Ghosh and Satyam Roy Chowdhury. They also described Bangabandhu's struggles and passing of his days in hardship during the student life in Kolkata.

Besides, the two daughters of the Father of the Nation – who had escaped the 15th August massacre – also projected political life and philosophy of the greatest leader during the discussion.

At the meeting, Goutam Ghosh and Satyam Roy Chowdhury said they visited the Bangabandhu Memorial Museum at Dhanmondi in the capital and saw the ghoulish signs of the 15th August killing in every corner of the Museum.

They also apprised the Prime Minister of their feeling about the Father of the Nation Bangabandhu.

Referring to the ‘Bangabandhu’s Unfinished Memoirs’ and ‘Karagarer Rojnamcha’, they described the two books as the great history.

Goutam Ghosh and Satyam Chowdhury also said they feel proud for making the documentary on the life and works of the Bangalees’ great leader.

Later, the PM and her younger sister Sheikh Rehana was interviewed on Bangabandhu’s struggle in his political life as well as during his Kolkata life.

The Indian national award winning filmmaker Goutam Ghose is making a 30-minute documentary film titled ‘Kolkatai Bangabandhu’ (Bangabandhu in Kolkata) to highlight the life and works of Bangabandhu during his stay in Kolkata.

On Apr 4, Goutam Ghosh began the work of the film by shooting in a classroom at the Maulana Azad College in Kolkata, which was named as Islamia College when Bangabandhu studied there during 1945-46 academic year.