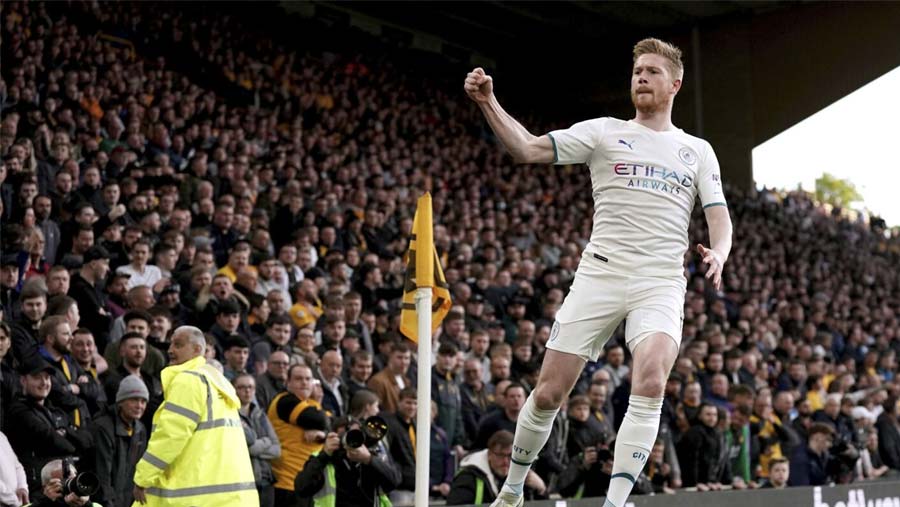 Manchester City took another stride towards winning the Premier League title on Wednesday (May 11) evening after thumping Wolverhampton Wanderers 5-1 at Molineux.

Pep Guardiola's side now need only four points from their final two fixtures to ensure they will finish above Liverpool and win their fourth title in five seasons.

De Bruyne has played a central role in all of those previous triumphs but this was an individual display that must rank among the finest of his stellar collection in a City shirt.

The Belgian started the move that led to his side's opener, and finished it too, running on to Bernardo Silva's pass to slot home.

Wolves did not take long to respond, with a rapid counter-attack ending when Pedro Neto found Leander Dendoncker in space on the edge of the box to fire past Ederson.

This was De Bruyne's stage, however, and he quickly put his side back in front. Again, he played a part in the build-up too, and was in the right place to smash in the rebound after Jose Sa beat Raheem Sterling to his pass.

His third goal – again with his so-called weaker left foot – was the pick of the bunch, and saw him drive towards the edge of the area and curl into the bottom corner.

De Bruyne's hat-trick was his first for City and at 24 minutes was the third-quickest in Premier League history.

He celebrated in style by copying the meditation celebration of his soon-to-be team-mate Erling Haaland, who City reached an agreement to sign this week, but he was not finished yet.

City came out for the second half looking for more goals to improve their goal difference, which was already three better than Liverpool's before kick-off.

Raheem Sterling thought he had extended their lead when he ran clear and beat Sa but an offside flag cut short his celebrations.

It was left to De Bruyne to make it 4-1, typically making no mistake when a Phil Foden cross was deflected into his path and finding the bottom corner with his first right-footed effort of the night.

More chances followed, with Foden hitting the post and Sterling missing an easy chance but eventually someone else did get in on the act, with Sterling tapping into an empty net after Sa denied Joao Cancelo.

This was still the De Bruyne show, however. City are not over the line yet, and their next test is an awkward trip to West Ham on Sunday, but on this evidence they will take some stopping.