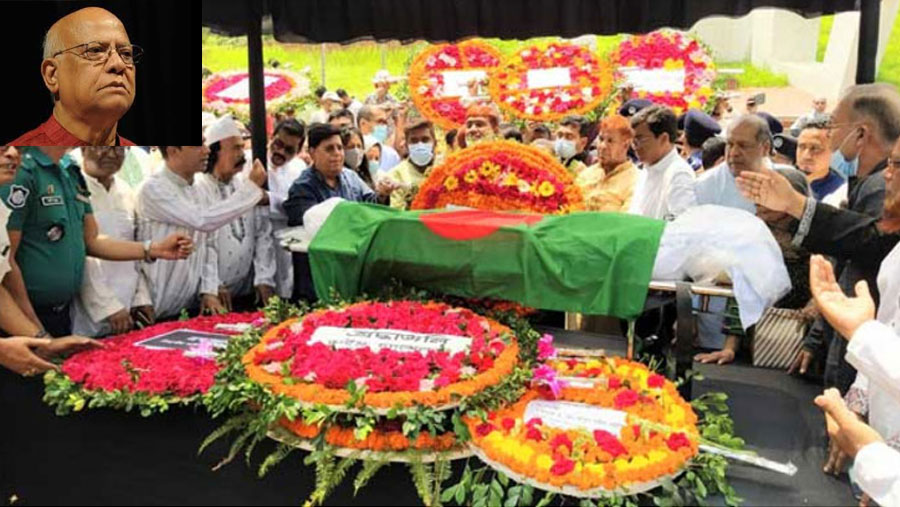 Former Finance Minister Abul Maal Abdul Muhith, one of the organizers of Liberation War and Language Movement veteran, was laid to rest on Sunday (May 1) at his family graveyard at the Deputy House in Rayanagar in Sylhet as per his last desire. He was buried next to the graves of his parents (Abu Ahmad Abdul Hafiz and Syeda Sahar Banu Chowdhury).

The last Janaza of AMA Muhith was held at 2.13 p.m. at the ground of Sylhet Government Alia Madrasah.

People from all strata including leaders of all political parties of Sylhet, representatives of socio-cultural and professional organizations, administration officials and employees took part in the Janaza.

Earlier, the body was taken to the Central Shaheed Minar in Sylhet at 12 noon, where people from all walks of life paid glowing tributes to Muhith by placing wreaths at his coffin.

There, a Guard of Honor was given to the former Finance Minister by a smart contingent of Sylhet Metropolitan Police.

Before the janaza in Sylhet, Planning Minister MA Mannan in his speech said: "He was my elder brother, my leader. He was my chief mentor."

"I have worked under his leadership. He was an ideal person. He was honest, selfless and above regionalism. He was involved in culture, literature and sports. He is the role model of our generation," he said while recalling Muhith's memories.

Environment, Forests and Climate Change Minister Md Shahab Uddin said: "We lost our guardian at the death of Muhith Bhai. The people of the country lost an experienced economist. This vacuum can't be fulfilled."

Member of Parliament (MP) of Moulvibazar-2 and former Chief Whip Abdus Shahid said: "He is our pride, our guardian and role model. Under his leadership, we have worked for the development of Sylhet and Bangladesh. The country has lost one of its gems."

Hafiz Ahmad Majumder, MP of Sylhet-6 constituency, recalled the memories of Abul Maal Abdul Muhith saying that he had lead a successful life.

Mokabbir Khan, MP from Sylhet-2 constituency, said he was the shining star of the country.

Sunamganj-3 lawmaker Muhibur Rahman Manik said: "Muhith was a legendary man of Sylhet. He was the beacon of knowledge. He devoted himself for the development of the country. We are deeply saddened by his sad demise."

Habiganj lawmaker Abdul Majid Khan said: "The death of Muhith Bhai is not an ordinary death. It is the departure of a great man. We will follow his ideology."

Speaking on behalf of the family before the Janaza, Abul Maal Abdul Muhith's younger brother, Foreign Minister Dr A K Abdul Momen sought doa from all for his late brother.

Economist, diplomat, freedom fighter, former finance minister and ruling Awami League's advisory council member Abul Maal Abdul Muhith died at a hospital in the capital at around 12:56 a.m. on Apr 30 at the age of 88.

AMA Muhith was born on Jan 25, 1934 in Sylhet's Dhopadighirpar. Muhith was the third among 14 siblings of Abu Ahmad Abdul Hafiz and Syeda Sahar Banu Chowdhury.