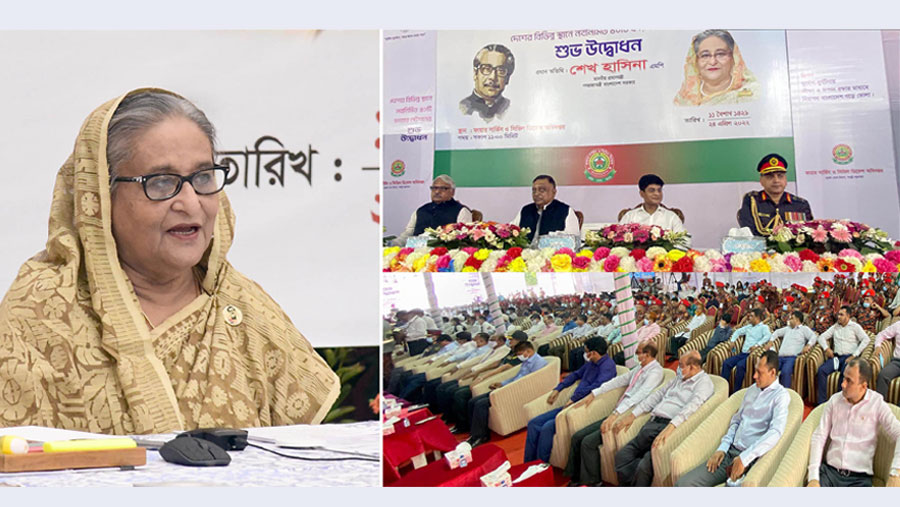 Prime Minister Sheikh Hasina on Sunday (Apr 24) directed the authorities concerned to ensure fire extinguishing system in every structure, saying the government has to see the safety and security issues as it is working to change the countrymen's fate.

"Each building, office, court, school, college, university, institution, shopping mall, recreation centre, cinema hall, industry and all structures will have to be the fire fighting and extinguishing systems," she said.

The premier said this while addressing the inauguration ceremony of the newly constructed 40 fire stations in different parts of the country as the chief guest.

She virtually joined the function held at Fire Service and Civil Defence Directorate Headquarters here from her official residence Ganabhaban in the city.

Mentioning fire extinguishing system very important, she said alongside making sure to have this system, it is also inevitable to keep rain water harvesting facility and water body everywhere to tackle any accident and conduct rescue operation.

"It is very important requirement to ensure own safety and security as well," she opined.

Sheikh Hasina asked the architect, engineer, project director or concerned officials and owner to keep having fire fighting and extinguishing system in their mind for safety and security of the structures.

"We (government) set up fire station and buy firefighting equipment of Taka thousand crore, but those will not come to any work – we don't accept it anymore," she said.

The government is working to change the fate of the country's people as it has also the responsibilities to see the safety and security issues of the people, she added.

At the outset of the ceremony, a video documentary on the fire stations was screened.

The PM urged the architects, engineers and planners to keep options for firefighting such as spaces of vehicle movement, availability of water etc while they develop any design.

She also directed the authorities to ensure having source of water, rainwater harvesting system and water body while establishing any housing estate.

In addition, she said the skyscraper should have balcony or open space so that people could gather there while any fire incident occur.

"Most of the time, the fire fighters could not rescue people due to lack of any strong place or balcony where people could gather," she added.

"I always tell it to them (owner) but most of them, don't want to comply with the provision of keeping the open space or balcony as money will come if every inch of space is rented. They put the people's life at risk only for money," she observed.

The head of the government called upon the people of the country to be vigilant to prevent any fire incident.

In this regard, she also urged all to ensure protection of water reservoirs, fire extinguishing system in buildings, mills and other structures.

She simultaneously asked the Fire Service and Civil Defence Directorate to conduct training campaign and fire drill in schools, colleges and industries on how to control inferno.

The premier lauded the skill and dedication of the firefighters during various incidents, and recalled the firefighters who were killed while taking part in fire control and rescue operations at different times.

The premier also informed that the 40 newly constructed fire stations are located at 39 upazilas in 25 districts of 5 divisions.

Sheikh Hasina said there were only 204 fire stations in the country in 2009 when the Awami League assumed power and now the number reached 456, while 55 more new fire stations to be opened by Jun 30.

Apart from the construction of fire stations, she highlighted various activities of her government to enhance the capacity of the fire service and civil defense agencies, including the installation of state-of-the-art firefighting equipment, advanced training of firefighters.

Referring to various plans of the government to ensure efficient fire service, the prime minister said, "We need a force capable of dealing with fire risk and other disasters in the country to ensure sustainable development."

She revealed that an initiative has been taken to establish "Bangabandhu Sheikh Mujib Fire Academy" to enhance the capacity of fire service personnel.

"So, take care of those properly and make sure the maximum service we can get from it," she added.

Cautioning the people on attacking fire fighters and their vehicles during any incident, she said it is totally unacceptable and this type of occurrence should not be repeated.

To this end, she directed the officials concerned to take stern legal action against the people who would be involved in such crime.

Turing to price hike of daily essentials and its hoarding, the premier said the government continues its best effort to control the prices of commodities in the country amid the high inflation rate throughout the world.

"We've been trying our best to keep the prices of essentials under control," she said.

Sheikh Hasina also directed the authorities concerned to take proper actions against the hoarders of essential items or those who play foul games with commodities prices.

She said the Covid-19 has caused economic recession throughout the world and the Ukraine-Russia war deepened it.

Noting that it has now become difficult to import some goods due to the ongoing war, the premier reiterated her call to the countrymen to ensure the optimum use of the soil for food autarky.

Urging the countrymen not to leave even an inch of land fallow, Sheikh Hasina said, "cultivate as much as you can. Produce what is possible on whatever land you have. Don't need to be dependent on anyone rather produce yourself."