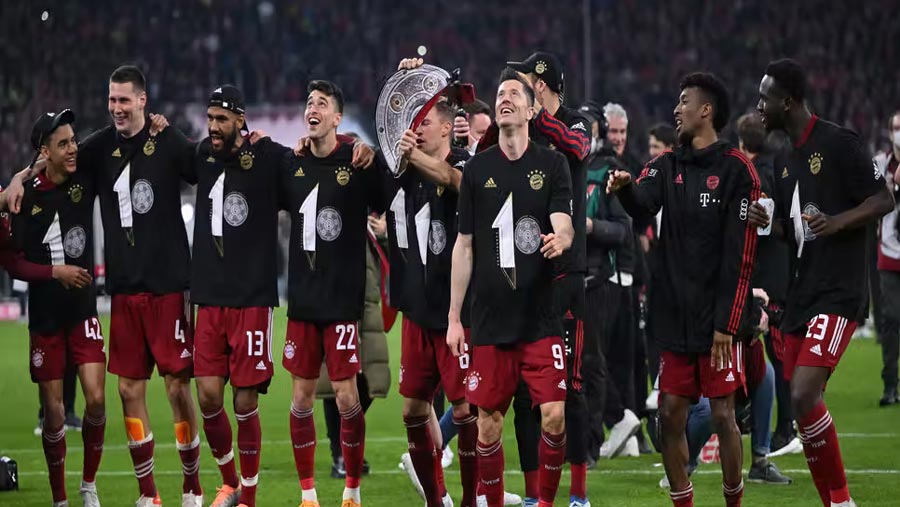 Bayern's 3-1 victory over second-placed Borussia Dortmund at the Allianz Arena gave them an unassailable 12-point lead with three games left, sparking the traditional "Bierdusche" (beer showers) on the pitch. Bayern are the first club to win 10 consecutive titles in one of Europe's top leagues. Yet the feeling among Bayern fans is that another league title is little consolation for premature exits in both the German Cup and Champions League. Winning the Bundesliga has become the bare minimum expected of Bayern each season.

It is the first club in Europe's top five leagues to win 10 consecutive titles.

The beer was flowing as Bayern's players celebrated on the pitch, with teammates throwing the iconic steins over each other at full-time.

The German powerhouse secured the league title after opening up a 12-point gap with three games remaining, underlining its dominance over the past decade.

Julian Nagelsmann's team knew a win against Dortmund in Saturday's Der Klassiker would be enough, and it raced into a 2-0 lead before half-time.

Goals from Serge Gnabry and Robert Lewandowski seemed to put the Bavarians in total control, but Emre Can halved the deficit after the break with a penalty.

Dortmund then began to put pressure on the hosts, but youngster Jamal Musiala secured the victory with a goal in the closing stages.

Despite its domestic dominance, Bayern received a lot of criticism after crashing out of the Champions League at the quarterfinals stage, losing over two legs to Villarreal.

But the team and manager Nagelsmann have now delivered a much anticipated league title for their fans to celebrate.

"Just for these moments... this is the best," said Thomas Mueller, who won his 11th title. "We really wanted to win it here. There was a lot of frustration in the past days and we could play it off today."

Mueller continued: "This is not boring. This is outstanding. The more you win the greedier you get every year."