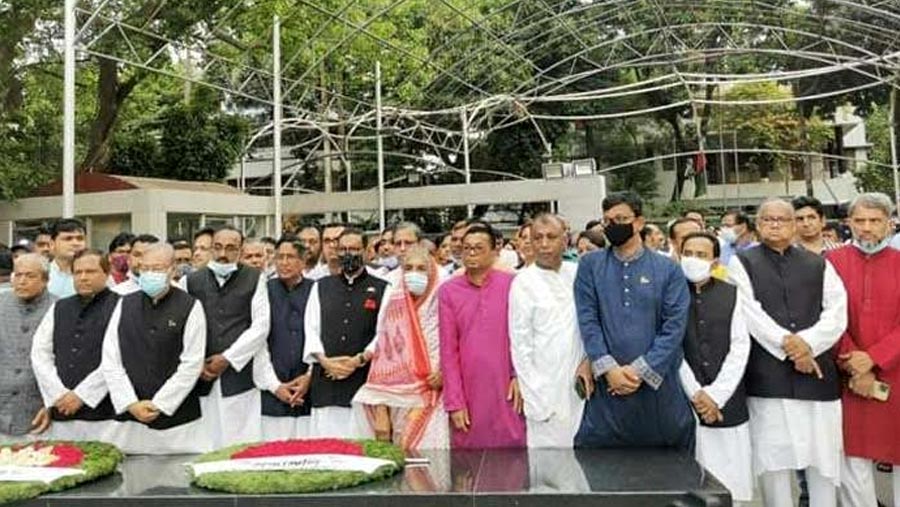 The ruling Bangladesh Awami League along with different political and social organizations on Sunday (Apr 17) paid rich tributes to Father of the Nation Bangabandhu Sheikh Mujibur Rahman on the occasion of the historic Mujibnagar Day. Homage was paid to Bangabandhu by placing wreaths at his portrait on Bangabandhu Bhaban premises at Dhanmondi road number 32 in Dhaka in the morning, local media reported.

The historic Mujibnagar Day was observed on Sunday marking the oath-taking ceremony of country’s first government on Apr 17, 1971.

Following the Pakistan army’s genocide on unarmed Bangalees on the black night of Mar 25 in 1971, senior leaders of Awami League assembled at Baidyanathtala in Meherpur on Apr 17 to form the provisional government of independent Bangladesh.

Baidyanathtala, mainly a mango orchard, was later named Mujibnagar after ceremonial formation of the provisional government of Bangladesh.

Father of the Nation Bangabandhu Sheikh Mujibur Rahman was declared the first president of the People's Republic of Bangladesh, while Syed Nazrul Islam was appointed the acting president in the absence of Bangabandhu.