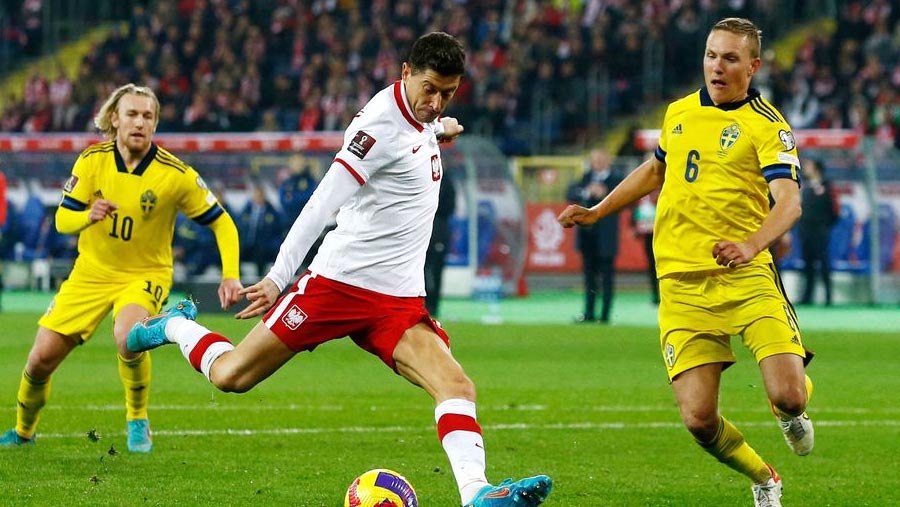 Portugal beat North Macedonia 2-0 and Poland saw off Sweden by the same score in play-off finals on Tuesday (Mar 29) to book their places in the 2022 World Cup in Qatar.

Bruno Fernandes scored both goals for Portugal to overcome the Balkan nation that had knocked out European champions Italy in a stunning result last week.

Italy's shock exit had North Macedonia dreaming of their first ever appearance at a World Cup finals but Portugal proved a step too far in Porto.

Fernandes set Portugal on their way at the Estadio do Dragao by finishing off Cristiano Ronaldo's pass in the first half and then put the victory beyond doubt in the second, connecting with a sublime cross from Diogo Jota.

The victory means Portugal extend their run of qualifying for all six of the World Cups since the turn of the century while Manchester United forward Ronaldo is on course for his fifth, aged 37.

Ronaldo's best previous result was reaching the semi-finals in 2006, when Portugal were beaten by Germany.

Portugal coach Fernando Santos said: "I would like to congratulate the players for their attitude and their quality. We controlled the match in a very clear way.

"Now, having already won the Euro and the Nations League we have a dream of bringing enormous joy to Portugal."

Robert Lewandowski stroked home a second-half penalty as Poland booked their berth in front of a fervent home crowd in Chorzow.

After the Poland captain converted a spot kick, Piotr Zielinski completed the scoring with a superb second goal for the hosts.

Poland go into Friday's draw for the group stages of the World Cup finals, from Nov 21 to Dec 18, after dominating the second half.

The Poles were awarded the crucial penalty just after half-time when midfielder Sebastian Szymanski rolled the ball to substitute Grzegorz Krychowiak, who was fouled by Jesper Karlstrom.

The referee pointed straight to the spot and Lewandowski casually arced his run, waited for Robin Olsen to move and then slotted the ball to the left of the Swedish goalkeeper.

It was his 75th goal for Poland and arguably one of his most important.

"It was really tough. I mean, this pressure!" Lewandowski said. "Even though I have taken many penalties in my career, this was one difficult. I knew this moment would have so much significance.

"We suffered, but now we can celebrate. I am proud and happy."

Zielinski put the result beyond doubt when he capitalised on a slip by Sweden defender Marcus Danielson and sprinted clear.

He slotted his shot past Olsen with 18 minutes left to spark wild celebrations from the home crowd.

Only a superb save from Olsen denied Lewandowski a second goal when the Poland striker was allowed a rare late chance in the area by the Swedish defence.

Zlatan Ibrahimovic came on for the final 10 minutes, but the 40-year-old Sweden striker was unable to influence the course of the match and will miss out on a third appearance at a World Cup finals.

Twelve European sides have now clinched a place at the World Cup.

Gareth Bales' Wales will take part in the other playoff final but that is on hold until at least June because the war in Ukraine led to the postponement of the Ukrainians' semi-final away to Scotland.