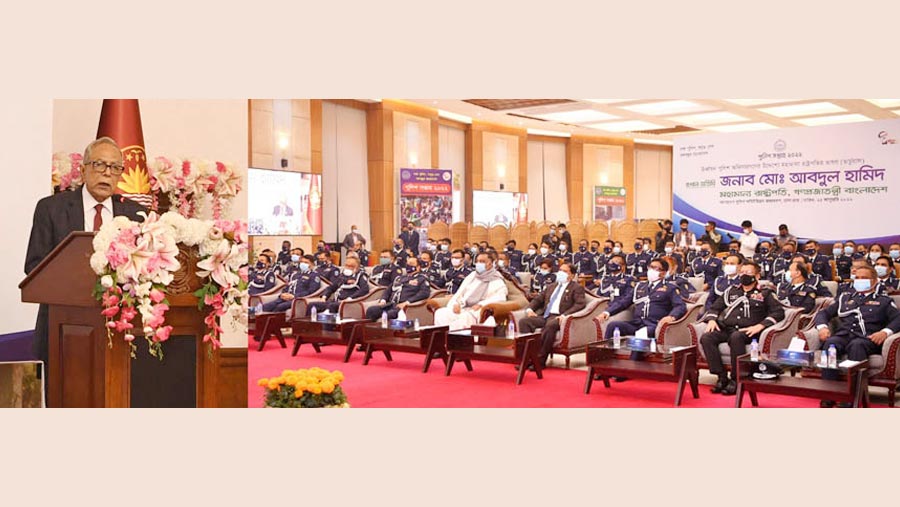 President Md. Abdul Hamid on Tuesday (Jan 25) asked police personnel to ensure that no service seekers are harassed anyway as he was virtually addressing a function marking ‘the Police Week 2022’ from Bangabhaban.

“When the common people fall prey in trouble they come to you to get legal services. You will listen to their problems and grievances very carefully and never hesitate to provide them (aggrieved people) with legal services sincerely,” he said.

The President added: “You will stand by the people as friends. Be humane police and discharge your responsibilities by providing services to the people and gaining their trust to become a real force.”

The head of the state called upon police forces to work for the welfare of the country and its people with patriotism, honesty and utmost devotion, being imbued with the spirit of the Great War of Liberation.

Noting that the government is working to make Bangladesh Police a useful force in a modern and developed country, he said with the spread of information technology, the access to police services has also been made easier.

“Besides, new units have already been formed to provide time befitting police services. As a result, police activities will be more dynamic and people will easily get better police services,” he hoped.

The President stressed on people's more involvement in community policing and beat policing as he mentioned that it was not possible for the police alone to eliminate crime from the society.

You have to make sincere efforts to build Bangladesh police as a ‘people-friendly police and humane police’, he categorically said.

Mentioning that the incumbent government is working to make Bangladesh a developed country by 2041, President Hamid said the country has already made a great stride in achieving the sustainable development goals (SDG) targets.

The President said the police must move forward to meet the challenges of a developed and prosperous Bangladesh through research, innovation and adoption of the latest technology.

In today’s world of evolving technology, cybercrimes are on the surge using domestic, regional and international networks and various apps, among other crimes, the President observed, saying, “we need to increase the capacity of the police to deal with cybercrime and create a rich, trained and skilled manpower with modern information technology.”

Abdul Hamid said police members need to be equipped with the latest technology to adapt to the future challenges.

Drive against militancy is one of the major achievements of Bangladesh police, he said, adding, people need to be involved in preventing militancy with raising massive awareness against it.

Terming drug abuse as a major social disorder where a section of country’s youth is reportedly involved in drug related crimes with the help of some unscrupulous employees of various government departments, including police, Hamid said the police need to be more proactive and active in this regard with Zero Tolerance policy.

The President said Bangladesh police has set a shining example of serving the people as a frontline fighter in the global Covid-19 pandemic.

He also prayed for the eternal peace of the departed souls of all the fearless policemen who have sacrificed their lives for the service, safety and security of the people of the country.