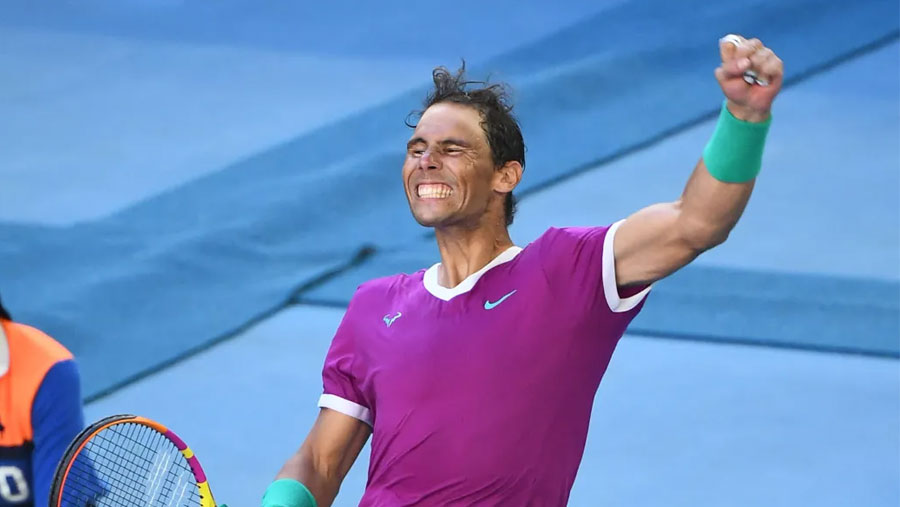 Rafael Nadal again showed the immense fight which has characterised his career as he overcame physical issues to beat Canada's Denis Shapovalov and reach the Australian Open semi-finals. Spanish sixth seed Nadal won 6-3 6-4 4-6 3-6 6-3, despite struggling physically in the fourth set.

Nadal, whose only title at Melbourne Park came in 2009, needed medication for what seemed to be a stomach issue.

The 35-year-old faces Matteo Berrettini or Gael Monfils in the last four.

Nadal is two more victories away from earning a record 21st Grand Slam men's title, which would move him clear of long-time rivals Novak Djokovic and Roger Federer.

Nadal's relief at coming through the toughest of tests was evident after Shapovalov pushed a backhand volley wide on the Spaniard's first match point.

Grinning widely, Nadal celebrated by standing in front of his box and staring at his team while shaking both fists towards them. In contrast, Shapovalov demolished his racquet on the court.

Afterwards, Nadal said he "didn't know" how he managed to win on a Melbourne afternoon where temperatures topped 30C.

"I was completely destroyed," he said. "It was a very tough day, very warm, I didn't practice for it.

"At the beginning of the match I was playing great, I know how difficult it is to play against a player like Denis.

"I had my chances at the beginning of the third, I didn't get it and then started to feel a bit more tired and he pushed me."