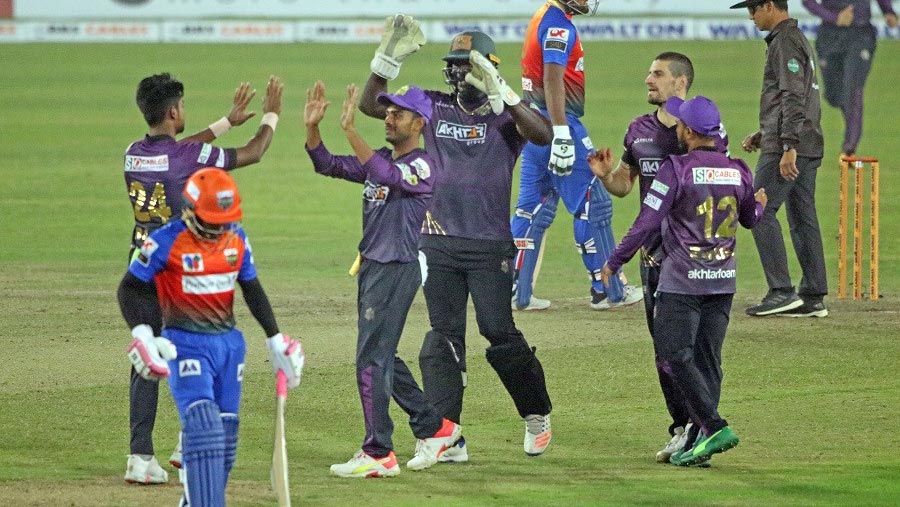 The English allrounder blasted a 20 ball-34 and then followed it up with 1-37 as Chattogram registered their second victory in three matches. It was Khulna’s first defeat after their win against Minister Group Dhaka in the opening game.

Howell’s 34 runs knock is the highest for Chattogram but still they ended with massive 190-7, the tournament’s highest score so far, after put into bat first.

Khulna’s chase got a setback when their opener Andre Fletcher was hit on his neck by a bouncer of Chattogram pacer Rejaur Rahman Raja and left the field. They however could make 165-9 at the end.

Khulna Tigers' manager Nafees Iqbal informed that Fletcher was feeling ok, but for precaution, he was taken to the Evercare Hospital. Fletcher before that scored 16 off 12. Sikandar Raza came as the substitute for him and made 22 off 12.

After Fletcher’s departure, Khulna was heavily relied on their captain Mushfiqur Rahim who too disappointed after being out for just 11.

Mahedi Hasan and Yasir Ali kept the chase alive, with free flowing batting but Shoriful Islam dismissed the former for 30 off 24.

Shoriful then also took the wicket of Yasir Ali who top-scored for the side with 26 ball-40, hitting two fours and three sixes. His dismissal effectively threw Khulna out of the game.

Earlier Chattogram made a fluent start to make the Khulna bowlers disarray. The two openers of Chattogram—Kenner Lewis and Will Jacks scored 23 runs off the first over, delivered by Sohrawardi Shuvo, which is a record in the first over of BPL.

Their marauding batting helped the Port City amass 64 runs in the first powerplay though they lost those two batters in the process. Lewis struck 25 off 14 with two fours and as many sixes while Jack hammered 17 off 7 with one four and two sixes.

They were little bit slow in the middle overs before Howell gave the finishing touch to help the side edge closer to 200-run mark. Howell clubbed four fours and one six for his 34 not out off 20 balls. He was ably supported by Naeem Islam who clobbered 15 off 5 to play a perfect foil to Howell.

Sabbir Rahman with 32 and skipper Mehidy Hasan Miraz with 30 were the other notable scorers.

Pacer Kamrul Islam Rabbi was the most successful bowler for Khulna with 2-35.