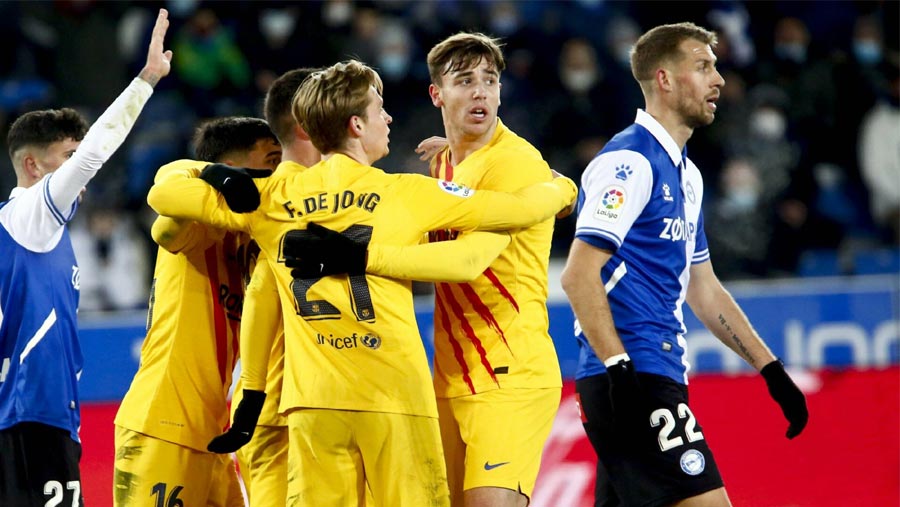 FC Barcelona beat Alaves with a late Frenkie de Jong goal in LaLiga to earn the Catalans a barely deserved win on Sunday (Jan 23). De Jong popped up in the 87th minute to sweep home from close range and hand Xavi Hernandez's side all three points in a match that saw Barca struggle throughout. Barcelona, who have already been eliminated from this season's Champions League and Copa del Rey, climbed to fifth in the standings with 35 points from 21 matches. They trail leaders Real Madrid by 15 points, with a game in hand, and are only a point adrift of fourth-placed Atletico Madrid. Alaves remained in 19th place with 17 points from 22 games, three points adrift of the safety zone.

Xavi's side dominated possession but it was Alaves, 19th in the table, who had the better chances.

Pere Pons fired straight at Marc-Andre ter Stegen shortly before half-time, while Joselu flashed a header wide in the second half.

The win moves Barca to within a point of fourth-placed Atletico Madrid, who they host at the Nou Camp next weekend.

Barca looked weary after back-to-back extra-time defeats over the past week, to Real Madrid in the Spanish Super Cup last weekend and Athletic Bilbao in the Copa del Rey on Thursday.

They enjoyed 76% possession and had 10 corners to Alaves' one, but struggled to create many clear-cut openings.

A turgid match looked to be drifting to a goalless draw when Torres, signed from Manchester City earlier this month, ran onto Jordi Alba's chipped ball over the top and laid the ball back for De Jong to finish from close range.