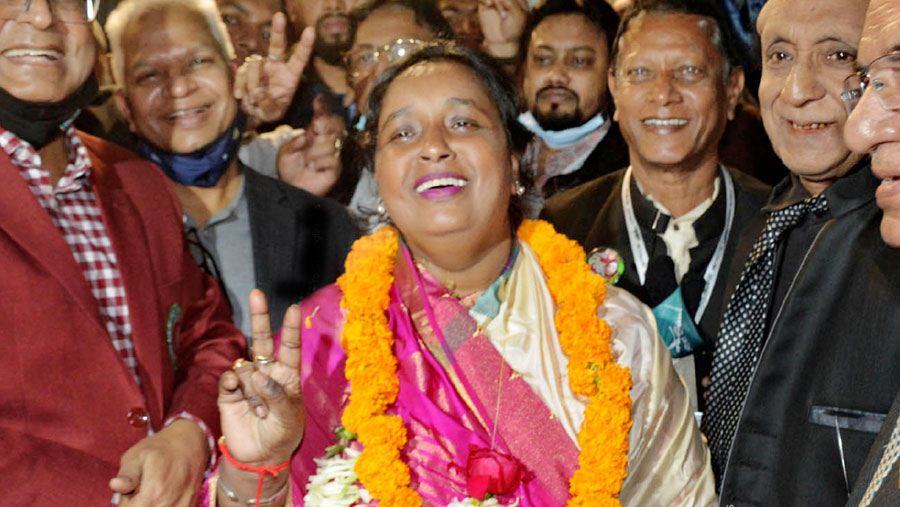 According to the unofficial results, Ivy with the symbol of "Boat" bagged 1,59,397 votes while her rival candidate Taimur with "elephant " got 92,562 votes.

Earlier, the voting began at 8:00 a.m. and continued till 4 p.m. without any break while the people were seen exercising their franchise through the Electronic Voting Machines (EVMs).

Awami League mayoral candidate Selina Hayat  cast  her vote at Deobhogh Shishubagh School polling centre at about 10:45am while her main rival independent candidate Taimur Alam Khandakar voted at the Narayanganj Islamia Kamil Madrasa Centre in Masdair at about 8:30 a.m.

Earlier, the Election Commission announced the poll schedule for of the NCC on Nov 30 while a total of seven candidates vied for mayoral post.

Besides, 148 candidates contested in the general wards and 34 in the reserved seats for women.

According to the EC, about 50 per cent  of the total 5.17 lakh voters exercised their rights franchise at 192 polling centres to elect the city mayor and councillors for 27 general wards and nine reserved seats  for women.

A total of 14  judicial magistrates were deployed to prevent any untoward situation, the election was held in a peaceful manner.

Besides, three tier security measures were also taken for the peaceful election while more than 5,000 members of the law enforcing  agencies were deployed to ensure security of the polling stations and outside of the centres.

Apart from this, there were 64 mobile teams of the police and Border Guard Bangladesh (BGB) personnel were deployed in polling centres.