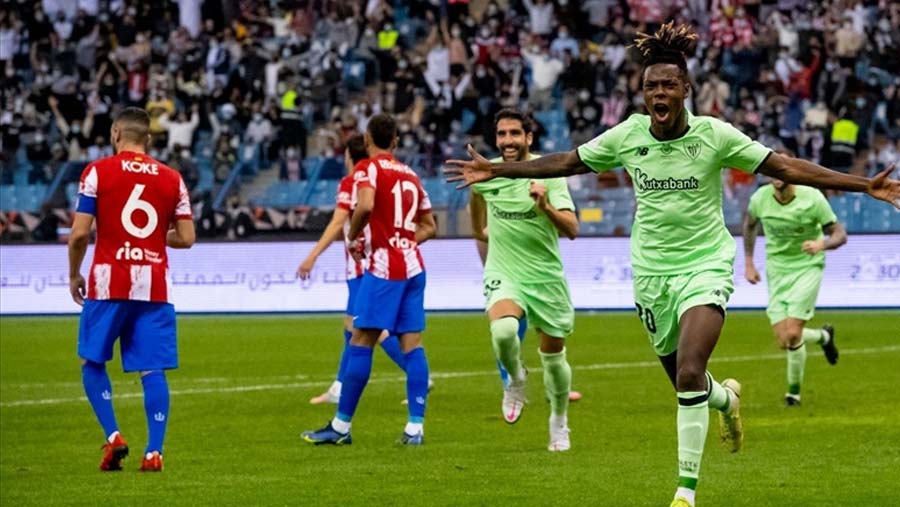 Athletic Bilbao substitute Nico Williams struck late in the second half to give the Spanish Super Cup holders a 2-1 come-from-behind win over LaLiga champions Atletico Madrid in Thursday's (Jan 13) semi-final. Bilbao set up a showpiece clash on Sunday against Real Madrid, who beat Barcelona 3-2 on Wednesday.

Athletic Bilbao came back from a goal down to beat La Liga champions Atletico Madrid 2-1 and set up a Spanish Super Cup final against Real Madrid.

The Basque side trailed just after the hour mark when a header from Joao Felix his the post before being deflected into the goal off the back of goalkeeper Unai Simon.

A 77th-minute header from Yeray Alvarez levelled the scores.

But Nico Williams hit the winner nine minutes from time in Saudi Arabia.

Real Madrid made sure of their place in Sunday's final in Riyadh with a 3-2 win over Barcelona on Wednesday.

The tournament in Saudi Arabia features four teams: the top two in the previous season's La Liga, and the winners and runners-up from the Copa del Rey.

Teenager Williams beat Atletico skipper Koke to the ball to head the winner past Jan Oblak in goal.

"I'm very emotional right now," said the 19-year-old, who lined up for the match alongside older brother Inaki.

"I hope there will be many more joys like this. I'm very happy to have been able to experience this with my Inaki and my mother, who came to hug us at the end of the match.

"She told me I deserved it. The hug with my brother after my goal is a moment I will never forget."