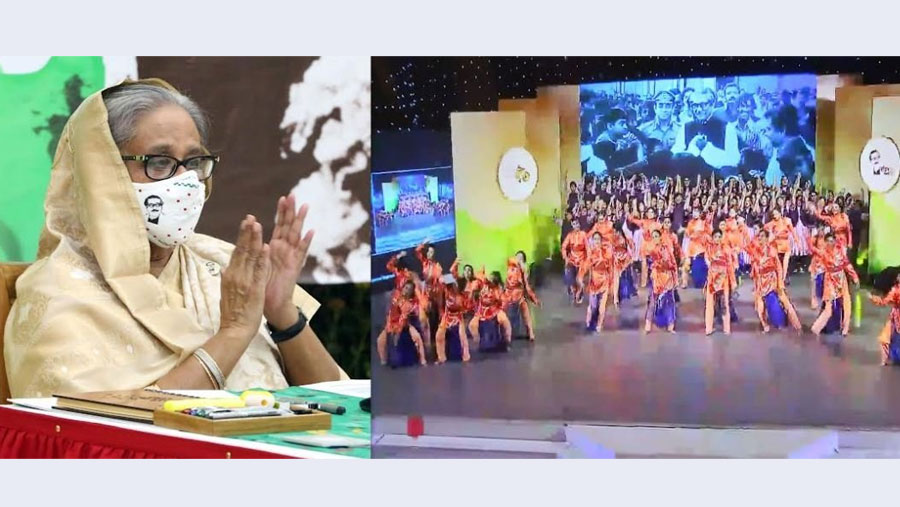 Prime Minister Sheikh Hasina on Monday (Jan 10) vowed to change the lot of the distressed people by transforming Bangladesh into a developed and prosperous country as envisioned by the Father of the Nation, calling upon all to work from their respective positions to advance the country maintaining the existing progress.

"Today, our target is to materialise the dream of Bangabandhu for which he liberated the country. We will bring smile on the faces of distressed people and build a Shonar Bangla free from poverty and hunger," she said.

The PM reiterated her commitment saying that she would implement the dream of the Father of the Nation by changing the fate of the distressed people.

She said this while virtually presiding over a discussion titled "Mukto Swadeshe Jatir Pita" (Father of the Nation in the Liberated Homeland) from her official Ganabhaban residence in Dhaka marking 50 years of Father of the Nation Bangabandhu Sheikh Mujibur Rahman's homecoming after the country’s independence.

The National Implementation Committee for Father of the Nation Bangabandhu Sheikh Mujibur Rahman’s 100th Birth Anniversary Celebration organised the function at the Shaheed Monirul Alam Auditorium at the BTV premises in Dhaka.

Sheikh Hasina, elder daughter of Bangabandhu, said their target is to shape the fate of the people for which her father struggled throughout his life and he was jailed and tortured time and again and finally sacrificed his life.

The PM called upon the people to do their parts in transforming Bangladesh into a Shonar Bangla maintaining the country's existing advancement.

She thanked the countrymen as the Awami League has got the chance to work for the people after being elected to power time and again.

The PM said it was a big matter that they have got the chance to celebrate the country's golden jubilee of independence, birth centenary of the Father of the Nation and 50 years of Bangabandhu's homecoming.

She said that they had a plan to celebrate 50 years of Bangabandhu's homecoming on a large scale at his birthplace Tungipara, Gopalganj, adding that they are now observing it on a limited scale due fresh surge of new variant of the coronavirus, thinking people’s safety.

Former Vice-Chancellor of Dhaka University Prof Dr AAMS Arefin Siddique spoke on the occasion while former foreign secretary Mohiuddin Ahmed, one of the three persons who received Bangabandhu at the Heathrow International Airport in London on Jan 8 in 1972 on his arrival from the Pakistani jail, shared his experience of that moment.

At the outset of the programme, a group of children sang the national anthem. At that time, all attending the function stood in solemn silence for some time in respect to the Father of the Nation while the theme song of the Mujib Borsho was also played. An audio-video documentary was screened on the occasion.

Bangabandhu, the undisputed leader of the nation and supreme commander of the country’s Liberation War, returned to the sacred soil of independent Bangladesh via London and New Delhi on Jan 10 in 1972, after 290 days of confinement in Pakistan jail. Since then, the nation is observing the day as the Homecoming Day of the Father of the Nation.

Referring to the speech delivered by the Father of the Nation on his homecoming from Pakistani jail on Jan 10 in 1972, Sheikh Hasina said there was a complete plan on how an independent country would be run in that speech.

"Issues, including what will be the structure of an independent country, how it will be run alongside on which ideal the country will work, were in his speech," she added.

In his speech, Bangabandhu also mentioned that Bangladesh would be a secular, developed and prosperous country, she said.

The Father of the Nation demanded one thing from the Pakistanis when the announcement of his hanging was made, she said, quoting Bangabandhu as saying, "Send my body to my Bangalees and my land of Bangla."

She added: He never scared death rather wanted to conquer it.

About the miserable days of Bangabandhu in Pakistani jail, Sheikh Hasina said that her father had to bear with inhuman torture in prison, but he never shared the days with them.

After being insisted time and again by his younger daughter Sheikh Rehana, Bangabandhu only said he does not want to disclose it as they would be able to tolerate it, she said.

The PM said the words are enough to understand what kinds of tortures he had to face in Pakistani jail.

His homecoming was long awaited by the countrymen, she said.

The premier said Bangabandhu made Bangladesh the least developed country (LDC) in only three and a half years alongside rebuilding the war-ravaged country.

Bangabandhu was killed along with most of his family members on Aug 15 in 1975 when he had been working to reach democratic rights to the grassroots of people and took a programme for socio-economic development by decentralizing the power.

"This was not only an attack on a president, but also an attack to kill ideals of an independent state and the spirit of the Liberation War," she added.

The PM said the people would realise it after analyzing the works of the killers and anti-liberation forces when they were in power.

"They (anti-liberation elements) did nothing to change the lot," she said.

Since assuming office, the Awami League government has been working for the welfare of Bangladesh aimed at giving the people an improved and better life.