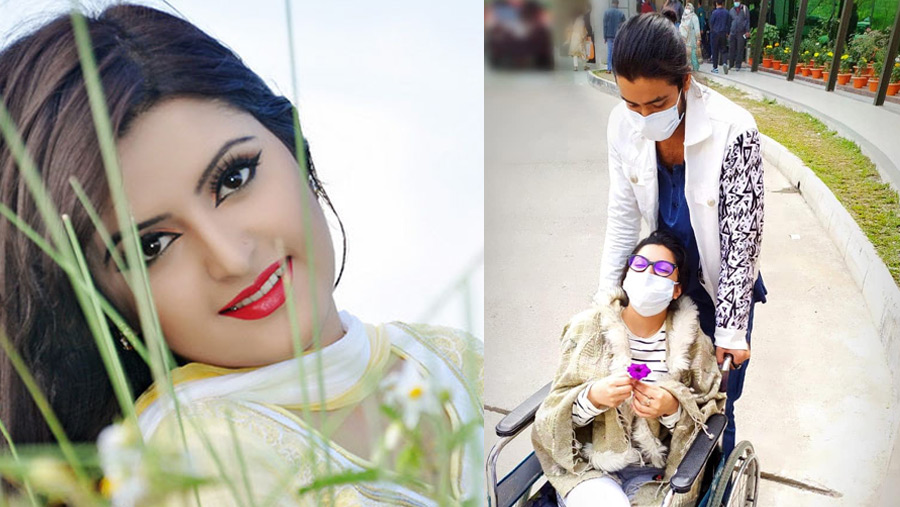 Popular Bangladeshi actress Pori Moni (Real name is Shamsunnahar Srity) and her husband Sariful Islam Raaz are expecting their first child. The actress became aware that she is expecting after she went to visit a doctor on Monday (Jan 10). Pori and Raaz fell in love at the set of Giasuddin Selim-directed upcoming film 'Gunin'. After that, they got married. On Monday, social media was abuzz with speculation after Pori Moni posted a photo with 'Ice Cream' star Raaz on her Facebook profile. With the comments section restricted, the photo showed the actress in a wheelchair being pushed by Razz outside a hospital, bearing the caption, “Congratulations Pori. Thank you #Raaz.”

Dhallywood actress Pori Moni is expecting a baby. The actress confirmed the matter to several media outlets on Monday (Jan 10) afternoon. The father of the child is actor Sariful Islam Raaz (Shariful Raaz).

Pori said she could perceive the matter that she conceived and went to a physician on Monday. Pori Moni said both of them broke into tears after getting the news.

Further confirming the news to the media, Pori Moni said, ''I am going to be a mother. Alhamdulillah... I am fine. When the doctor confirmed it today, I felt like I am the strongest woman in the world. I am flying with enormous joy and happiness."

Describing her condition and further plans, Pori Moni added, "The doctor has told me to be a little more careful now. I am also keeping myself away from shooting for the next year and a half. I want to give birth to a healthy baby."

Regarding her relation with Sariful Raaz, she has recently said that they fell in love on the set of noted director Giasuddin Selim's upcoming film 'Gunin'. She confirmed that they married a few days ago.