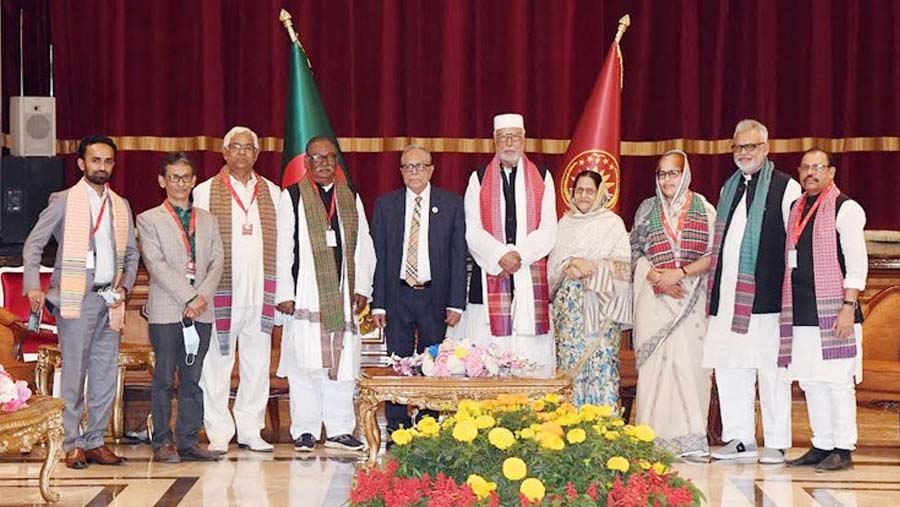 After the dialogue, President's Press Secretary Md Joynal Abedin told BSS that during the hour-long discussion, the nine-member delegation placed the six-point proposal, including enacting a new law.

"If it is not possible to enact a law at this moment, we proposed to form a five-member EC with inclusion of more than two women members," Kader Siddique said.

Instead of the search committee, the EC members must be patriotic and trustworthy and acceptable to the people of the country, he added.

The KSJL proposed to the Election Commission not to formulate any election rules without consulting the registered political parties of the country.

They said the neutrality of the government is more important than the efficiency of the Election Commission.

Welcoming the leaders at Bangabhaban, the President said the formation of an acceptable EC as well as the cooperation of all concerned, including political parties, is a must to ensure a free, fair and credible election.

The head of the state thanked to the delegation to take part in the dialogue.

The Bangabhaban spokesman said the President has invited 38 political parties, including Bangladesh Nationalist Party (BNP), for the dialogue over the formation of an independent, neutral and credible EC.

On Dec 20, the first day of the ongoing dialogue with the political parties, the President began the talks with the Jatiyo Party, main opposition in the Jatiya Sangsad (Parliament).

Next Talks with the Jatiyo Party (JP) will be held on Jan 10 at 6 p.m. while with Jatiya Samajtantrik Dal (JSD) will be held at 7 p.m.

The President will hold talks with the Islami Front Bangladesh at 6 p.m. on Jan 11 and with the Bangladesh National Awami Party (Bangladesh NAP) at 7 p.m. on the same day.

The Jaker Party is scheduled to hold dialogue at 6 p.m. while Bangladesh Kolyan Party will sit at 7 p.m. and Bangladesh Jatiyo Party (BJP) will hold at 8 p.m. on Jan 13. Ruling party Bangladesh Awami League will hold discussion with the President at 4 p.m. on Jan 17.

Earlier, a dialogue was held with the participation of political parties ahead of the ninth, tenth and eleventh parliamentary elections.

The President has been given the power to appoint CECs and no more than four Election Commissioners.

In the last few terms, the President has formed the Election Commission on the basis of the recommendations of the Search Committee.

The current EC's five-year tenure will end on Feb 14 next year.

During this period, the President will form a new EC, under which the twelfth parliamentary polls will be held.