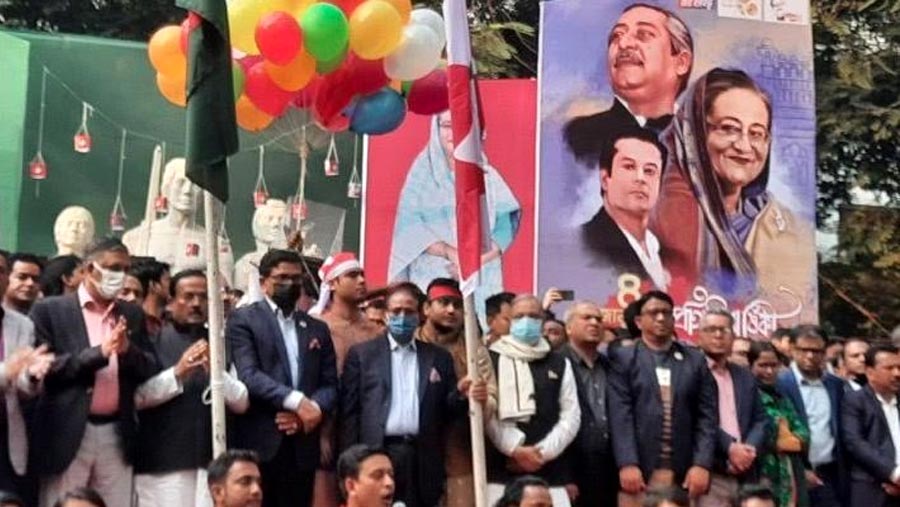 Bangladesh Chhatra League, the student wing of Awami League having a glorious history of struggle and success, on Tuesday (Jan 4) celebrated its 74th founding anniversary with elaborate programmes. This historic organisation came into being on Jan 4 in 1948 at the instruction of Father of the Nation Bangabandhu Sheikh Mujibur Rahman with an aim to attain the country's independence.

The five-day-long celebration commenced with the hoisting of national and party flags at party offices at 7:30 a.m. and placing wreaths at the portrait of Father of the Nation Bangabandhu Sheikh Mujibur Rahman at Dhanmondi road-32 at 8:00 a.m. on the day. At the same time, a delegation, consisting of some leaders of the central executive committee, paid rich tribute to the Father of the Nation by placing a wreath at his graveyard at Tungipara and offering Doa.

After cutting a cake at Dhaka University Curzon Hall in the morning, leaders and activists of Chhatra League, led by its president Al Nahian Khan Joy and general secretary Lekhak Bhattacharya, gathered on the premises of DU's Aparajeo Bangla in the noon to bring out a joyous procession.

In the coming days, Chhatra League will fight to foil the conspiracies aiming to establish a non-communal country and building Shonar Bangla as dreamt by the Father of the Nation, he added.

Marking the anniversary, a discussion will be held at Krishibid Institution Bangladesh on Wednesday (Jan 5) in the morning. Prime Minister, also the President of Awami League Sheikh Hasina, is expected to virtually join the discussion from her official Ganabhaban residence in Dhaka.

After a short rally on Aparajeo Bangla premises, Chhatra League leaders and activists brought out a colourful procession from the Dhaka University campus that paraded some city streets including the Shahbagh-Kakrail-Paltan area and ended at its central party office at Bangabandhu Avenue.

The Chhatra League played pioneering roles in the Language Movement in 1952, in the victory of Jukta Front in 1954 polls, anti-Aiyub movement in 1958, education movement in 1962, six-point movement in 1966, mass upsurge in 1969, elections in 1970, the great Liberation War in 1971, rehabilitation activities in post-war Bangladesh, the movement for restoration of democracy after 1975 changeover, the student movement in 1983 and anti-autocratic movement in 1990.

The Chhatra League was also engaged in the movement launched by Sheikh Hasina against the 'state terrorism' unleashed by the then BNP-Jamaat alliance government after the 2001 polls.

The Chhatra League also waged a strong movement after the 1/11 changeover when the army-backed government arrested Sheikh Hasina on Jul 16 in 2007 without any reason.

Now the Chhatra League is working relentlessly for building a digital Bangladesh.