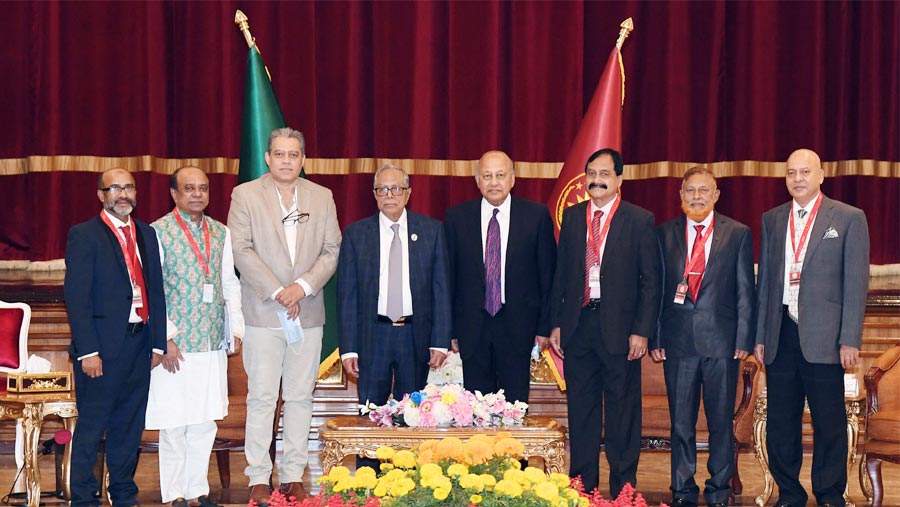 Gano Forum placed some proposals, including enactment of a time-befitting law while Bikalpa Dhara Bangladesh placed three proposals, including formation of a ‘search committee’, on Sunday (Jan 2), the seventh day of the ongoing dialogue with President Md. Abdul Hamid, aimed at constituting an independent, neutral and acceptable Election Commission (EC).

After the dialogue, President's Press Secretary Md Joynal Abedin told state media that the leaders of the Gano Forum made several proposals, including the enactment of a law for forming an EC in accordance with Article 118 (1) of the Constitution.

The Gano Forum representatives said the people have no choice but to elect their representatives and it is mandatory to form an independent, neutral and credible Election Commission.

The EC formation would be fruitful through discussion and holding views-exchange meetings with the political parties, they hoped.

Mentioning that the enactment of law for formation of EC is now a public demand, the Gano Forum delegation said the government would be able to enact a time-befitting law taking the public opinion.

They further proposed the President to form an EC with the individuals, believing in the spirit of independence, democracy and Liberation War of the country.

Meanwhile, Bikalpa Dhara Bangladesh in their dialogue with the President presented a three-point proposal, including formation of a "Search Committee" with prominent persons.

They recommended appointing the Chief Election Commissioner (CEC) and other election commissioners from the names to be submitted by the registered political parties.

Bikalpa Dhara Bangladesh spokesperson and Presidium Member Mahi Badruddoza Chowdhury, MP, was in the delegation of the party in the dialogue.

Gano Forum and Bikalpa Dhara Bangladesh representatives expressed their gratitude to the President for initiating talks with the political parties over the EC formation.

Welcoming the political leaders at Bangabhaban, the President said their valuable opinions are very important for the formation of an acceptable Election Commission.

The head of state said the formation of the EC is a constitutional responsibility and there is the justification for taking their (political leaders) advice to form an acceptable EC.

On Dec 20, the first day of the ongoing dialogue with the political parties, the President had the talks with the Jatiyo Party, the main opposition in the Jatiyo Sangsad (National Parliament).

A total of 10 political parties held talks with the President so far.

On Monday (Jan 3) the dialogue will be held with the Ganatantri Party at 6 p.m., the Communist Party of Bangladesh (CPB) at 7 p.m. and the Bangladesh Khilafat Movement at 7.30 p.m.

On Jan 4, the talks with the Samyabadi Dal of Bangladesh will be held at 6 p.m. and the Islamic Andolon Bangladesh at 7 p.m.

Dialogue with Jatiyo Party will be held at 6 p.m. and Jamiate Ulamaye Islam Bangladesh at 7 p.m. on Jan 5.

The talks with the Gano Front is scheduled for Jan 6 at 6 p.m. and the Liberal Democratic Party (LDP) at 7 p.m.

Dialogue with Krishak Sramik Janata League will be held on Jan 9 at 6 p.m. and Bangladesh Muslim League at 7 p.m. on that day.

No date has yet been set for talks with other political parties, the press secretary said.

Earlier, dialogues were held with the political parties ahead of the ninth, tenth and eleventh parliamentary elections.

The current EC's five-year tenure will end on Feb 14. Before that, the President will form a new EC, under which the twelfth parliamentary polls will be held.