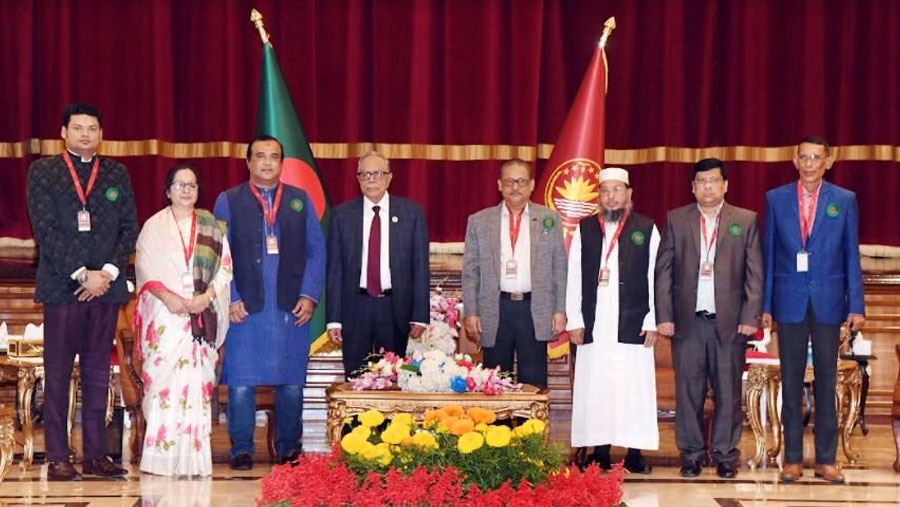 The Bangladesh Nationalist Front (BNF) on Wednesday (Dec 29) placed a three-point proposal while the Islami Oikya Jote (IOJ) placed four proposals to President Md. Abdul Hamid on the sixth day of the ongoing dialogue aimed at forming an independent, neutral and acceptable Election Commission. A seven-member BNF delegation led by its president SM Abul Kalam Azad and another seven-member delegation of IOJ led by Mulana Abul Hasanat Amini separately held the discussions with the President at the Durbar Hall of Bangabhaban in the afternoon and in the evening respectively. After the dialogue, President's Press Secretary Joynal Abedin briefed media.

Joynal Abedin said, during the dialogue, the BNF leaders proposed the formation of an election-time government led by the incumbent Prime Minister in line with the Article 56 of the Constitution. They proposed to form an EC with the help of a "Search Committee" and they can appoint not more than five people in this committee. They proposed the names of five people in this committee. The BNF leaders thanked the President for initiating discussions with the political parties on the EC formation.

Meanwhile, the IOJ also placed a four-point proposal to the President during the meeting. The proposals includes: enacting a permanent law for forming the Election Commission, involving the politically non-biased, acceptable, dependable, faithful (Imandar) individuals, ensuring impartial role of the country's Executive during the polls' period and ensuring neutral role of the EC to hold a fair, free and credible elections.

Welcoming the BNF and IOJ leaders at Bangabhaban for the dialogue over the formation of EC, the President sought the valuable opinions of the political parties as important things for the formation of an acceptable Election Commission.

The President also asked all concerned not to give priority to financial issues in politics, rather evaluate the greater interest of democracy, the sacrifices of the leaders and workers and the party's ideology should be evaluated. The country's democracy should not be limited to polls process only, but should be spread through regular practices, the President added.

President Hamid called upon all political parties to take initiative to motivate the people in this regard. The head of the state started holding dialogue with the Jatiyo Party, the main opposition in the Jatiyo Sangsad, on Dec 20 over formation of the Election Commission.

Till date, talks with some eight political parties were held, according to Bangabhaban.

However, no date has been set for talks with other political parties.

Secretaries concerned to Bangabhaban were also present in the talks.

Earlier, a series of dialogues were held with the participation of political parties ahead of the ninth, tenth and eleventh parliamentary polls.

The current Election Commission's five-year term will expire on Feb 14, 2022. The President of the Republic will form a new commission, under which the 12th parliamentary elections will be held.