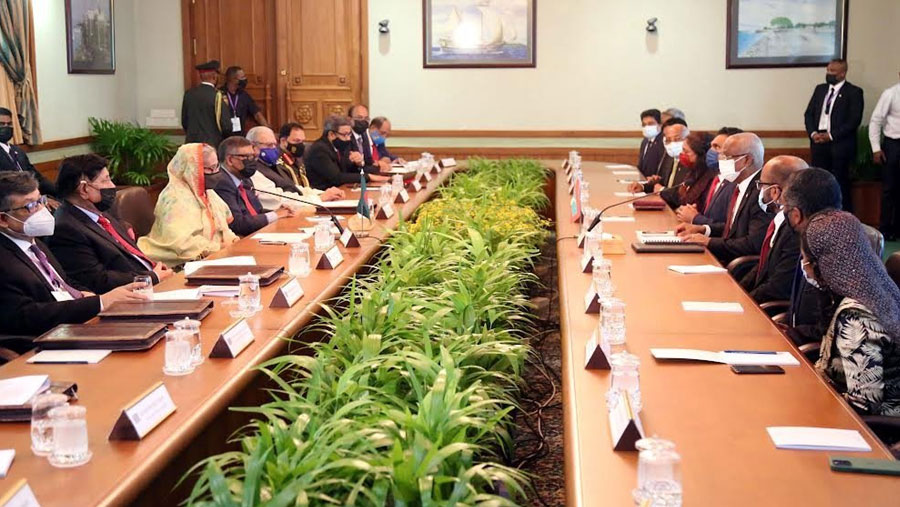 Prime Minister Sheikh Hasina said on Thursday (Dec 23) Bangladesh Biman is set to introduce air connectivity with the Maldives via Chennai of India as both the countries agreed to enhance connectivity aimed at increasing bilateral trade and investment.

“Our national flag carrier Biman Bangladesh Airlines is going to introduce flights with Maldives via Chennai. We hope that with the introduction of flights people to people contacts and exchange of tourism cooperation will be increased,” she added.

The prime minister said that the direct flight between Bangladesh and Maldives has been enhanced through the commencement of flights by Bangladeshi airlines US-Bangla.

The PM said during the dialogue they agreed to strengthen bilateral cooperation, especially in health, education, human resources development, youth and sports, fisheries and agriculture between the two countries and work together to face the challenge of climate change and the early repatriation of forcibly displaced Rohingyas to Myanmar.

During the talks, they also discussed MoU on Recruitment of Qualified Health Professionals between Bangladesh and Maldives, MoU between Bangladesh and Maldives on Cooperation in the Area of Youth and Sports and Agreement on Avoidance of Double Taxation and Prevention of Fiscal Evasion with respect to Taxes on Income and MoU on in the areas of Medical and Healthcare Science.

The premier said, “We reviewed the progress made so far on our earlier decisions and found the outcome satisfactory.”

She said that they also held discussions on regularization of undocumented Bangladeshi nationals who make substantial contributions to both economies.

Sheikh Hasina said that that they also discussed about cooperation in multilateral fora, support for each other’s candidatures, and cooperation in countering terrorism.

The PM said that her government would not allow any sorts of terrorist activities against Bangladesh and any other countries using the soil of her country.

The Maldivian President also vowed to fight together against terrorism and extremism to ensure regional and global prosperity, sustainability and peace.

President Solih said his government would continue support in early repatriation of the Rohingyas.

He thanked the Bangladesh PM for her support during the Covid-19 pandemic period and sought initiative to issue on arrival visas for the citizens of Maldives.

Describing Bangladesh as a desired destination for Maldivian students, particularly for the medical students, President Solih urged the Prime Minister to issue full term visas for the students.