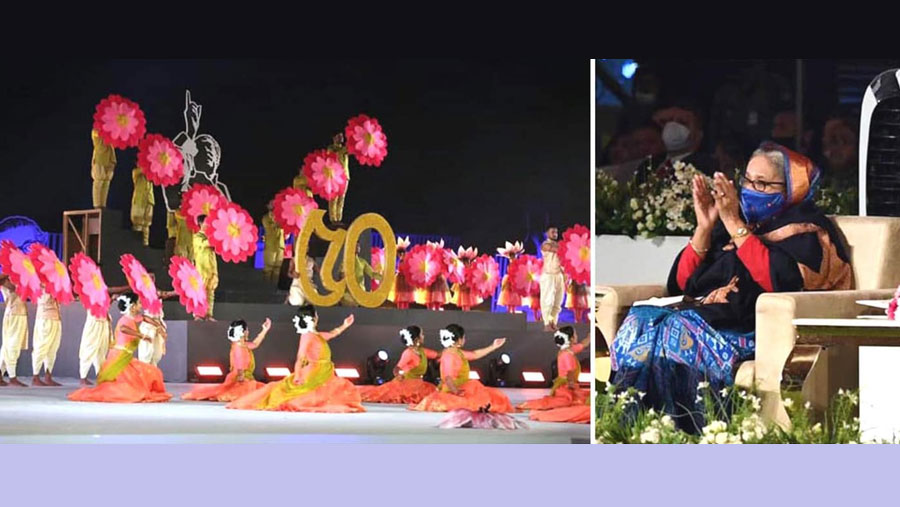 Prime Minister Sheikh Hasina on Friday (Dec 17) attended the concluding ceremony of the birth centenary of Father of the Nation Bangabandhu Sheikh Mujibur Rahman and the golden jubilee of the country’s independence at the South Plaza of the Jatiyo Sangsad in Dhaka. She enjoyed cultural shows performed by eminent local and foreign artistes and musicians, while illuminating light show was also demonstrated that made the performance spectacular, local media reported.

In the cultural show, life and philosophy of Bangabandhu, his works for the betterment of Bangladesh as well as the world were highlighted alongside narrating the development works and activities of the government under the leadership of Prime Minister Sheikh Hasina through "Punthi Path".

The premier was seen capturing and recording some moments of the cultural performances in her mobile phone. Speaker Shirin Sharmin Chaudhury was also present on the occasion.

The two-day programme titled "The Greatest Hero of the Glorious Victory" began on Thursday as part of the celebration of the Mujib Borsho coinciding with the 50 years of victory of the Liberation War.

President Md. Abdul Hamid and Indian President Ram Nath Kovind graced the occasion as the chief guest and the guest of honour respectively on the first day.

Prime Minister Sheikh Hasina on Thursday released commemorative postal stamps on the occasion of golden jubilee of the country’s victory and surrender of Pakistani occupation forces. She also unveiled a logo inscribed with “Mujib’s Bangladesh”, the brand name of Bangladesh Tourism and released the memorial postal stamp on the occasion of the birth centenary of Father of the Nation and the golden jubilee celebrations of country’s independence.