PM urges businessmen to be prepared for facing challenges 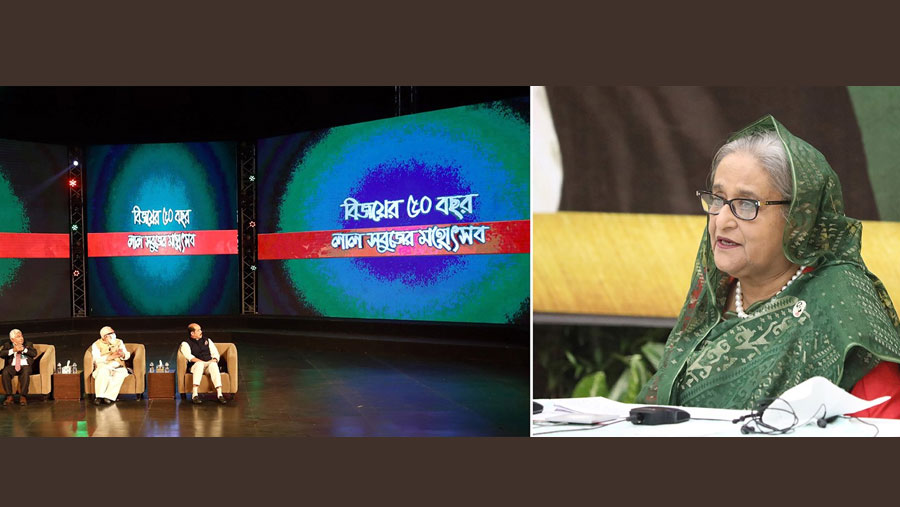 Prime Minister Sheikh Hasina on Wednesday (Dec 1) called upon the entrepreneurs to take preparation to face the challenges that Bangladesh is going to face immediate after it turns into a developing nation along with working to ensure economic solvency of the grassroots people for the country's overall development.

The PM said this while opening virtually a 16-day celebration event of the Federation of Bangladesh Chambers of Commerce and Industry (FBCCI) marking the country's Golden Jubilee of Independence from her official Ganabhaban residence in Dhaka, local media reported.

Reminding the business community that they have got the scope of doing business in the country as it had became independent, she urged the businessmen to work for ensuring economic solvency side by side with rising purchasing capacity at the grassroots people and for overall development of Bangladesh.

"Always keep in mind that the country and the soil have given you the scope (of doing business). All including the businessmen and service holders have got the scope as Father of the Nation liberated the country," she said.

The premier asked the businessmen to work for giving Bangladeshi people relief from the curse of poverty and ensuring county's development by transforming it into a prosperous and developed one as envisioned by Father of the Nation.

The FBCCI with the help of the Dhaka North City Corporation (DNCC) organized the inaugural ceremony of the event titled "Fifty Years of Independence-Grand Festival of Red-Green" at the city's Hatirjheel Amphitheatre. Beximco Ltd is the main patron of the programme. The PM later witnessed a colorful cultural programme.

A video documentary on improved Dhaka was also screened at the function.

The FBCCI is set to celebrate the 50 years of the country's independence through various cultural events that included Nazrul and Rabindra sangeet, regional based folk songs and dances performed by distinguished artistes.

Sheikh Hasina asked the entrepreneurs to take initiatives alongside the uplift programmes taken by the government for changing the lot of people at the grassroots belonging to their respective villages.

"You should take some programmes alongside the government ones so that the economic solvency and purchasing capacity of the rural people can increase. The more the buying capacity of the people will increase, the more your businesses will flourish as newer markets will be created for your goods. And thus the fate of the people at grassroots will be changed and your income will be increased," she said.

The premier said her government did not come to the power to do business rather to create all the possible facilities for boosting the businesses.

She added: "The Awami League government is a business friendly one which you people (businessmen) have already realized."

She said Bangladesh has reached today's position following the footprints of Father of the Nation Bangabandhu Sheikh Mujibur Rahman as he within only three and a half years after the independence started Bangladesh's marching forward towards a developed nation with 9 percent GDP growth.

Sheikh Hasina greeted the country's apex trade body, FBCCI, for arranging a 16-day celebration programme marking the country's 50 years of independence which helped people to know the real history of the liberation.

The PM said the history of Bangladesh's independence achieved through seeding bloods of hundreds of thousands of people under the leadership of Father of the Nation had been distorted after Bangabandhu's assassination in 1975.

Mentioning that the Awami League has brought the history after assuming power which had been erased before the people, saying, "Today, we can celebrate the victory. The freedom fighters now can say with keeping their heads high that they are the freedom fighters and liberated the country through the Liberation War. The family members of the Liberation War martyrs can say that they are the children of the martyrs' family."

The premier said they want that the people of the country to be inspired by the spirit of the Liberation War and uphold the ideals of the Father of the Nation while running the state.