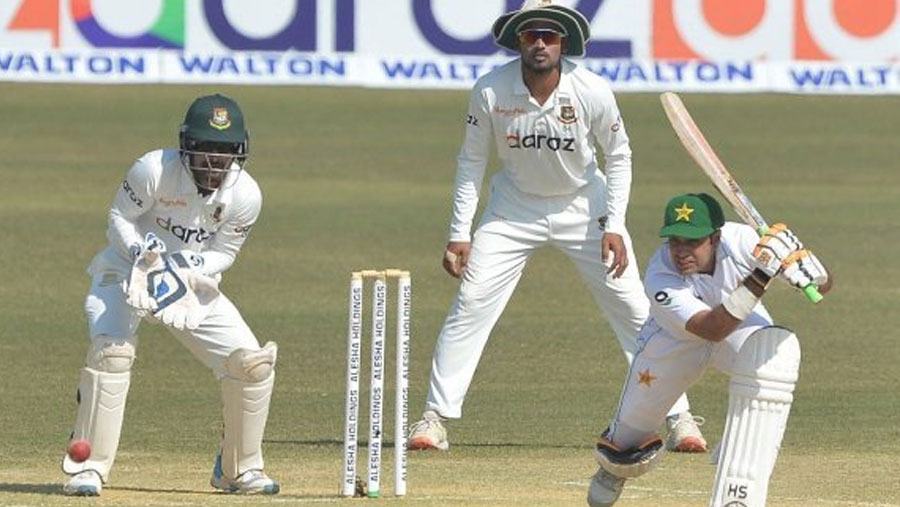 Pakistan batters took less than a session on the final day to complete an eight-victory over Bangladesh in the first Test at the Zahur Ahmed Chowdhury Stadium in Chattogram on Tuesday (Nov 30).

Opener Abid Ali missed out his successive hundred in the Test as he struck 91 off 148 balls while another opener Abdullah Shafique made 73 off 129 balls that ensured the visitors reaching 203-2 in 58.3 overs to clinch their victory and go 1-0 up in the two-match Test series.

Both the batsmen, who put up a 146-run stand in the first innings, frustrated Bangladeshi bowlers in the second innings also as they shared a 151-run opening stand after resuming their overnight score of 109-0.

Mehidy Hasan broke the stand by trapping Shafique in front while Abid, who made 133 runs in the first innings, became the victim of Taijul Islam in the same manner.

Azhar Ali and skipper Babar Azam then made unbeaten 24 and 13 runs respectively to ensure no further damage in their innings as Pakistan raced towards victory with more than two sessions still to be played.

Babar got a lucky reprieve on five in the innings when he gave Taijul an easy caught and bowed chance but the bowler failed to grab the opportunity as he dropped the regulatory catch.

Abid was named player of the match for his hundred in the first innings which was followed by a brilliant 91 in the second innings.

Earlier, both Abid and Shafique made the chasing task simple by putting up more than 100 runs on the penultimate day when they were set for a target of 202 runs by Bangladesh.

Pakistan pacer Shaheen Shah Afridi was another star performer for the visitors as he claimed 5-32 that helped them bowl out the hosts for 157 runs in their second innings.

The second and last Test will get underway at the Sher-e-Bangla National Stadium in Dhaka on Dec 4.