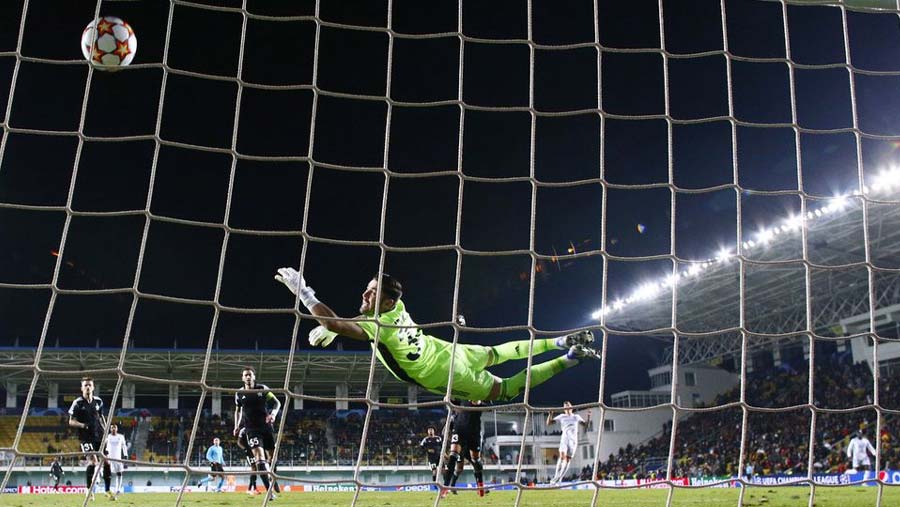 Real Madrid booked a berth in the Champions League knockout stages with a match to spare after strolling to a 3-0 win at Moldovan rivals Sheriff Tiraspol in their lop-sided Group D clash on Wednesday (Nov 24). Real top the group on 12 points from five games, two more than second-placed Inter Milan with the result also sending the Italian champions through after they beat Shakhtar Donetsk 2-0. Third-placed Sheriff, who stunned Real 2-1 in the reverse fixture in September, are third on six points and assured of carrying on in the Europa League after the winter break. Fourth-placed Shakhtar have one point. Real, who have won a record 13 titles in Europe's premier club competition, are at home to Inter in their final group match while Sheriff visit Shakhtar on Dec 7.

Real Madrid reached the Champions League knockout stage for the 25th successive year with a comfortable win against Sheriff Tiraspol in Moldova.

David Alaba opened the scoring with a free-kick that deflected beyond goalkeeper Giorgos Athanasiadis. Toni Kroos added a second before the break, firing in off the crossbar, while Karim Benzema then made it three.

It means Real Madrid are through with a game to spare, as are Inter Milan, who beat Shakhtar Donetsk earlier.

Edin Dzeko scored twice after the break in a 2-0 win for the Italians, who visit Real Madrid in the final group game - with only which team qualifies as winners still to be determined.

Carlo Ancelotti's side, who lost the reverse fixture against Sheriff, top the group on 12 points, two above Inter Milan.