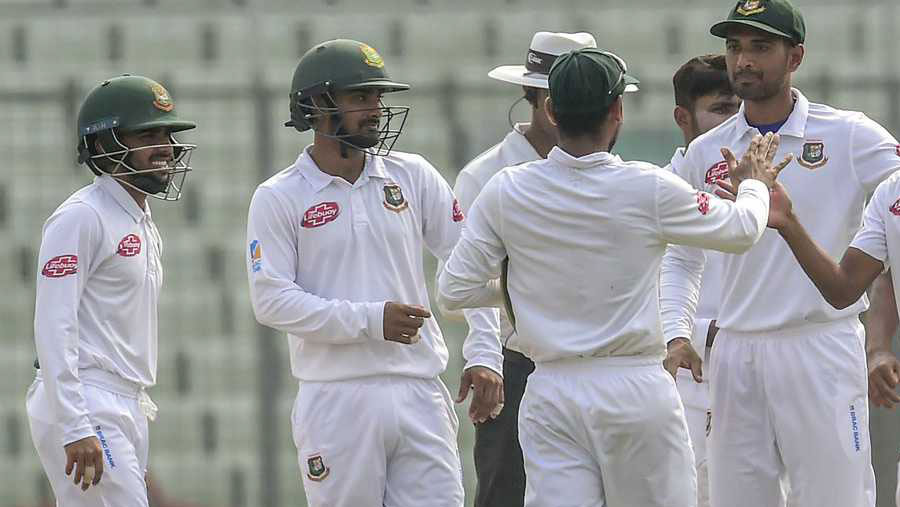 The Bangladesh Cricket Board (BCB) on Monday (Nov 22) named two uncapped players – Mahmudul Hasan Joy and Rejaur Rahman Raja – in the squad for the opening match of two-match Test series against Pakistan. Apart from them, there were little surprises in the 16-member squad.

All-rounder Shakib Al Hasan is also included in the squad but will have his fitness assessed before being considered for the first Test, starting Nov 26 at Zahur Ahmed Chowdhury Stadium in Chattogram. Experienced opener Tamim Iqbal earlier opted him out of the series due to his injury.

The two newcomers made their way into the squad based on their performance in the longer version format, said chief selector Minhajul Abedin Nannu.

Chattogram Division batsman Mahmudul Hasan Joy, a 21-year old,  has made a promising start to his first class career with two hundreds already in the ongoing National Cricket League.

The 22-year-old Raja, a pacer hailed from Sylhet, representing the BCB HP and Emerging Teams, has returned 33 wickets in 10 first class matches for Sylhet Division and Islami Bank East Zone.

“It is still early days for him but Mahmudul has showed good temperament for the longer version,” Nannu said.

“He is also an in-form batsman. With injury concerns to Taskin (Ahmed) and Shoriful (Islam), we needed to keep our pace bowling options open and Raja got the nod.  We have been monitoring his performances in first class competitions. He is strong and energetic and has a knack for taking wickets.”

Abedin also said he believes that this squad can put up a good fight against Pakistan, who will be playing Test series in Bangladesh for the first time after 2015.

“There is a fair bit of experience if you consider that Mominul (Haque), Mushfiqur (Rahim), Shakib, Taijul (Islam) and Miraz (Mehidy Hasan) are all part of the squad. We will obviously have to wait to see if Shakib makes it for the first Test but these players have been the most consistent performers for us in Tests and their presence can make a difference.”

“We have options in the spin department as well as in pace. The team for the first Test is made up of cricketers who have been playing together regularly and they know the demands of Test matches. Pakistan are a formidable team but we are confident that Bangladesh will be competitive if we are disciplined and patient.”

The team of the second and final Test, which is in Dhaka from Dec 4-8, will be announced ahead of the match.