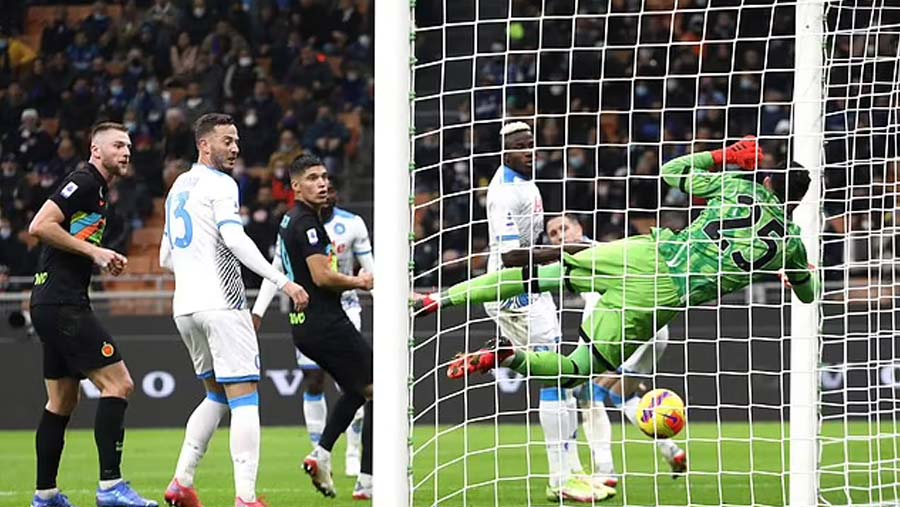 Serie A leader Napoli lost for the first time this season as Inter Milan reinvigorated its Italian title bid with a 3-2 win on Sunday (Nov 21).

Inter, the defending champion, cut the gap on Napoli and AC Milan to four points after 13 rounds and ended Napoli's status as the last remaining unbeaten team across Europe's five major leagues.

Dries Mertens, who had set up a pulsating finale with Napoli's late second goal, missed the chance to equalize in injury time when he blazed his shot over.

It was Napoli coach Luciano Spalletti's first return to the San Siro in Milan since he was fired by Inter despite leading it to fourth place in 2019.

Spalletti's players wore jerseys paying tribute to soccer great Diego Maradona, who died on Nov 25 last year, but it was another Argentine who scored the winning goal.

Lautaro Martinez scored Inter's third goal on a counterattack in the 61st minute, set up by compatriot Joaquin Correa, who ran almost from one penalty area to the other.

Inter goalkeeper Samir Handanovi preserved the result with a brilliant save to deny Mario Rui in injury time, forcing the ball onto the crossbar, before Mertens' miss.

The visitors had struck first in the 17th when Piotr Zielinski won the ball off Nicolo Barella, then recovered and ran forward to smash the ball from Lorenzo Insigne's pass in under the crossbar.

Hakan Calhanolu equalized with a penalty in the 25th, awarded after Kalidou Koulibaly was penalized through VAR for hand ball after blocking Barella's shot with his left arm.

Inter coach Simone Inzaghi was booked for his furious reaction before the spot kick was eventually awarded, and Koulibaly booked, but Inzaghi didn't let the yellow card dampen his passion as he continued screaming instructions at his players after the goal.

It prompted a furious reaction before the break, when Napoli goalkeeper David Ospina denied Barella. Inter scored from the resulting corner in the 44th, when Ospina was powerless to keep out Ivan Perii's header at the near post.

There was a lengthy delay early in the second half following a bad clash of heads between Napoli's Victor Osimhen and Inter's Milan Skriniar. Osimhen was unable to continue and went off with what looked a cheekbone injury.

Martinez scored but Mertens ensured a lively finale when he pulled one back in the 78th with a brilliant shot in under the crossbar. It was his 137th goal for Napoli.

There was another holdup for another clash of heads, between Ospina and Inter striker Edin Deko. Both continued with bandaged heads to see the late drama.