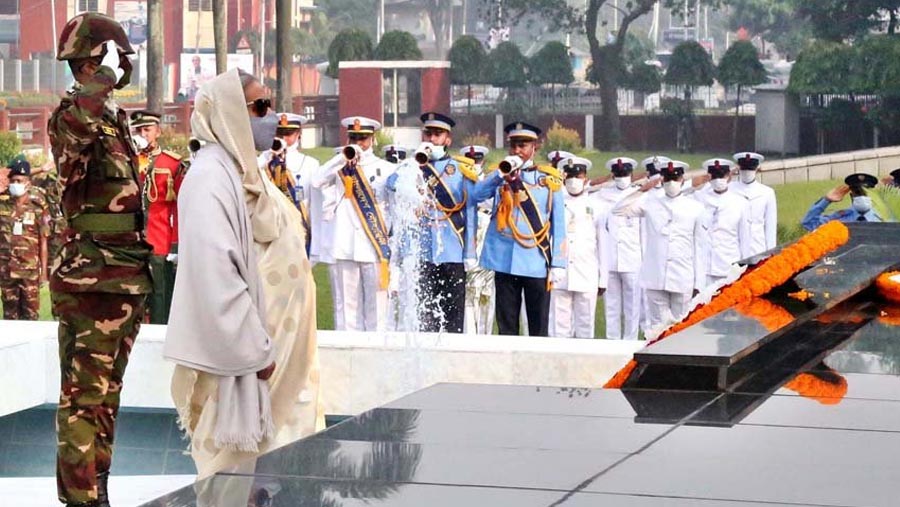 Prime Minister Sheikh Hasina on Sunday (Nov 21) paid glowing tributes to the martyred members of Bangladesh Armed Forces on the occasion of the Armed Forces Day-2021. The PM paid the homage by placing a wreath at the Shikha Anirban (flame eternal) in Dhaka Cantonment in this morning. After laying the wreath, she stood in solemn silence for some time to show profound respect to the memories of the armed forces martyrs, who made supreme sacrifices during the War of Liberation.

A smartly-turned out contingent drawn from Army, Navy and Air Force presented a guard of honour at that time, while the bugle played the last post. Later, Sheikh Hasina, also in-charge of the Ministry of Defence, signed the visitors' book kept on the premises of Shikha Anirban. PM's Security Adviser Major General (rtd) Tarique Ahmed Siddique was present.

After the wreath-placing ceremony, the PM went to the Armed Forces Division (AFD) where the chiefs of the three services made a courtesy call on her. On her arrival at the AFD, Sheikh Hasina was received by the PSO and director generals of the AFD.

On this day during the War of Liberation in 1971, the Bangladesh Armed Forces, comprising Army, Navy and Air Force, came into being and launched an all-out attack on the Pakistani occupation forces which expedited the victory in the Liberation War.