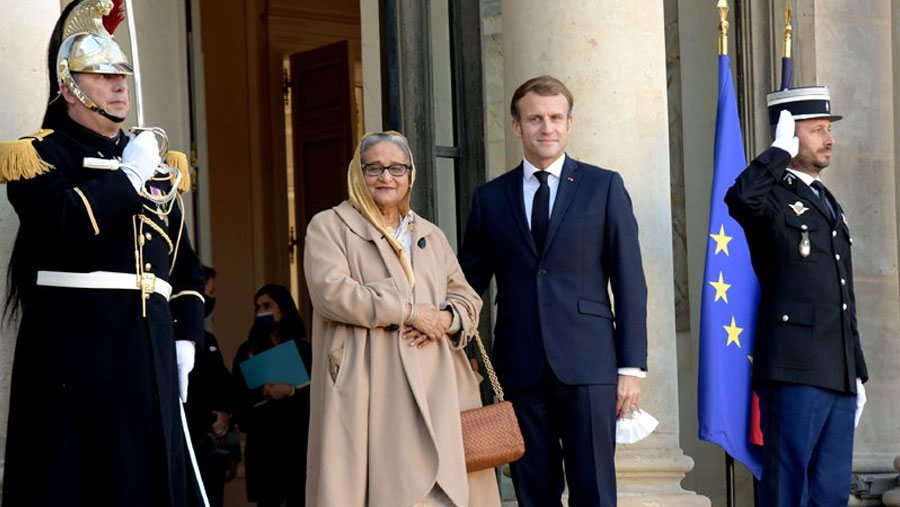 Prime Minister Sheikh Hasina was accorded a warm and rousing reception at Elysee Palace on the first day of her visit in Paris on Tuesday (Nov 9). The Presidential Guard gave the PM salute on her arrival at the Presidential Palace. French President Emmanuel Macron later received Sheikh Hasina. Then both the leaders went upstairs. They posed for photo sessions twice – during the reception and while going upstairs. They went for luncheon meeting and tete-a-tete after making brief statements.

In the evening, the PM had a bilateral meeting with French Prime Minister Jean Castex at his official residence the Matignon.

Sheikh Hasina arrived Paris from London in the morning to attend the 75th Anniversary of UNESCO and distribute the first-ever UNESCO-Bangladesh Bangabandhu Sheikh Mujibur Rahman International Prize for Creative Economy.

During her stay in Paris, Airbus CEO Guillaume Faury and Dassault Aviation president Eric Trappier, Thales president Patrice Caine will call on her at her place of residence on Wednesday. She will have a meeting with the French business organisation MEDEF's high-profile delegate. Later in the afternoon, she will visit the French Senate where she will receive an official reception during the ongoing Senate Session.

On Nov 12, the head of government will go to the Paris Peace Forum and attend a high-level panel discussion on South-South and Triangular Cooperation. Later, she will go to the UNESCO Headquarters to attend the inaugural session of the 75th Founding anniversary of UNESCO and she will deliver her speech there. She will participate in the dinner to be hosted by UNESCO Director General Audrey Azoulay in honour of the heads of the government and state.

Sheikh Hasina will attend a civic reception to be accorded to her by the expatriate Bangladeshis living in Paris on Nov 13.

She will depart De Gaulle International Airport by a VVIP flight of Biman Bangladesh Airlines in the afternoon and land at Hazrat Shahjalal Airport on Nov 14 morning.

On Nov 3, Sheikh Hasina arrived in London, the capital of the United Kingdom, from Glasgow after attending the World Leaders Summit at the COP26 and other events.

On Oct 31, the PM reached Glasgow on a two-week visit to the UK and France.