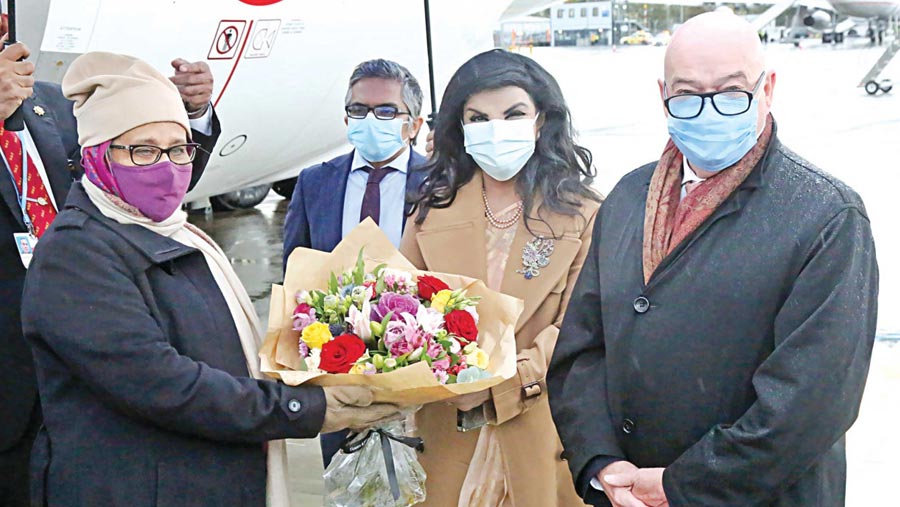 Prime Minister Sheikh Hasina has arrived in Glasgow, the port city of Scotland, this afternoon on a two-week visit to the United Kingdom and France to attend the COP26 world leaders' summit and other high-level events. A VVIP flight of Biman Bangladesh Airlines carrying the PM and her entourage members landed at the Prestwick Airport in Glasgow at 2:55 p.m. (local time) Sunday, local media reported citing PM's Press Secretary Ihsanul Karim.

Bangladeshi High Commissioner to the UK Saida Muna Tasneem received the PM at the airport.

The PM, who left the Hazrat Shajalal International Airport in Dhaka for Glasgow at 9:27 a.m. on Sunday, will return home on Nov 14.

According to the scheduled programme, she will stay in Glasgow on Nov 1-2, in London on Nov 3-8 and in Paris on Nov 9-13.  The PM will address the COP26 main event alongside taking part in its inaugural session on Monday (Nov 1).

She is expected to inaugurate a roadshow in the United Kingdom on Thursday (Nov 4) to attract more foreign direct investment in Bangladesh and will attend the "Bangladesh Investment Summit 2021: Building Sustainable Growth Partnership."

She will also handover the "UNESCO-Bangladesh, and Bangabandhu Sheikh Mujibur Rahman International Prize for the Creative Economy" at the UNESCO Headquarters in Paris.

The UK's Prince Charles and the founder of the Bill and Melinda Gates, Bill Gates will also pay courtesy calls on the PM.

During her stay in Glasgow, on Nov 1 morning, the PM will attend a side event titled "CFV-Commonwealth High level Panel Discussion on Climate Prosperity Partnership" at the Commonwealth pavilion on Scottish Event Campus.

The premier will hold a meeting with Commonwealth General Secretary Patricia Scotland QC. She will attend the inaugural ceremony of the COP26 and address the programme at the same venue. Sheikh Hasina will also hold a bilateral meeting with Sri Lankan President Gotabaya Rajapaksa.

The premier will attend the meeting of the leaders titled "Action and solidarity-the Critical Decade" at the British Pavilion.  In the afternoon on the same day, Bill Gates, the founder of the Bill and Melinda Gates will pay a courtesy call on Sheikh Hasina.

The premier will attend a VVIP reception of the COP26.  In the evening, Sheikh Hasina will virtually attend a civic reception to be accorded by the Bangladeshi community living in Scotland.

In the morning on Nov 2, the PM will attend a high level panel on "Women and Climate Change" at the COP26 venue.  Sheikh Hasina will hold a meeting with first minister of Scotland Nicola Sturgeon at the bilateral meeting booth. She will later attend the Commonwealth Reception.

In the afternoon, Prince Charles will pay a courtesy call on Sheikh Hasina.

Sheikh Hasina will attend a side event titled "Forging a CVF COP26 Climate Emergency Pact" at meeting Room-4 of the ground floor. The premier will attend the closing ceremony of the World Leaders Summit.

On Nov 3, the PM and her entourage members will leave Glasgow for London by a VVIP flight of Biman Bangladesh Airlines at noon. On that day, Speaker of the British Parliament Sir Lindsay Hoyle will pay a courtesy call on Sheikh Hasina.

The premier will attend some important events there including "Bangladesh Investment Summit 2021: Building Sustainable Growth Partnership", and a civic reception of the Bangladesh community living in London.

On Nov 9, she and her entourage members will leave London for Paris by a VVIP flight of Biman Bangladesh Airlines in the morning. Sheikh Hasina will call on President of France Emmanuel Macron at Elyse Palace on that day.  On the same day, she will also hold a bilateral meeting with France Prime Minister Jean Castex at his official residence of France, Matignon.

The PM will also attend some important events there including the prize giving ceremony of the "UNESCO-Bangladesh, and Bangabandhu Sheikh Mujibur Rahman International Prize for the Creative Economy" at UNESCO Headquarters and 75th anniversary of the UNESCO at the same venue.

Sheikh Hasina will virtually attend a civic reception of the Bangladesh community living in France on Nov 13.

She is expected to leave Paris for home on Nov 13 and reach Dhaka on Nov 14.