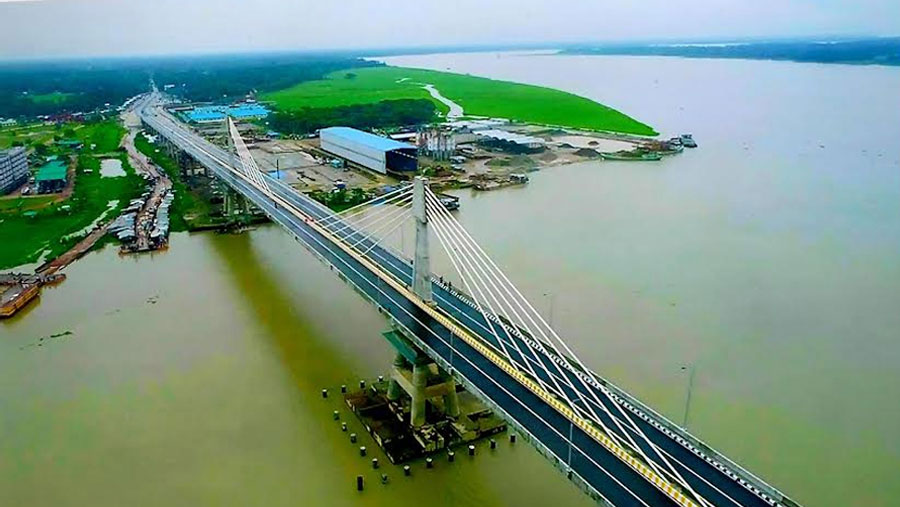 Prime Minister Sheikh Hasina on Sunday (Oct 24) inaugurated the much-awaited bridge constructed over the Payra River in Lebukhali area on Patuakhali-Barishal highway for traffic movement, paving the way for travelling to Patuakhali from Barisal without ferry. The premier opened the Payra Bridge joining virtually from her official residence Ganabhaban in Dhaka, local media reported.

The bridge has a "bridge health monitor" system, which has been installed for the first time in a bridge in the country.

The system will send signals of natural disasters, including thunderstorms and earthquakes or any damage, said officials familiar with the process. They said the both sides of 1470 metre long and 19.6 metre wide bridge will be connected by cables, while it is 18.30 metre high from the water level to ease movement of ships coming from and to Payra port. Besides, seven kilometer approach roads have been constructed on both sides of the bridge.

In the construction of the bridge, a single pillar has been used in the middle of the river which is expected not to disrupt the normal water flow of the river.

With the opening of Payra Bridge, direct road communication will be established between Dhaka and Kuakata after being completed the construction of the Padma Bridge.

The government approved the bridge construction project in May, 2012, while the prime minister laid the foundation stone of Payra Bridge on Mar 13, 2013.

The Kuwaiti Fund for Arab Economic Development and the OPEC Fund for International Development have jointly financed the construction of the bridge by Chinese firm Longjian Road and Bridge Construction.