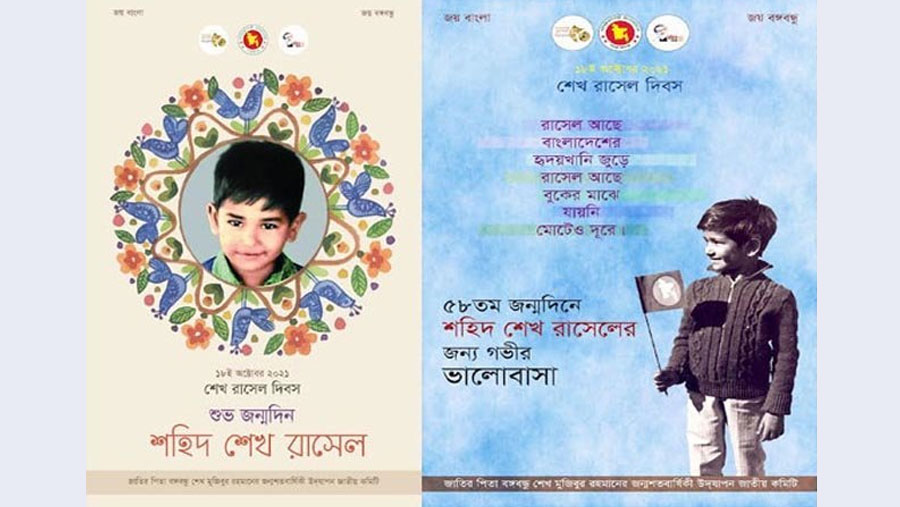 The first ever 'Sheikh Russel Day' will be observed in the country today, marking the 58th birthday of Father of the Nation Bangabandhu Sheikh Mujibur Rahman's youngest son Shaheed Sheikh Russel.

Sheikh Russel, also the youngest brother of Prime Minister Sheikh Hasina, was born on Oct 18 in 1964 at the historic Bangabandhu Bhaban at Dhanmondi 32 no road in the city. But he was brutally killed along with most of his family members, including his father Bangabandhu Sheikh Mujibur Rahman, on Aug 15, 1975 when he was a student of class four at University Laboratory School.

The Cabinet Division this year declared Oct 18, the birthday of Sheikh Russel, as Sheikh Russel Day under the category "Ka".

To mark the day, government bodies, ruling Bangladesh Awami League and its associate bodies, and different socio-cultural organizations have taken various programmes to observe the day at national and international levels.

On the day, 10 people, including children with special needs, will be awarded the 'Sheikh Russel Gold Medal' for their outstanding contribution to the fields of education, fine arts, literacy and culture, sports, science and technology, said State Minister ICT Zunaid Ahmed Palak told a press briefing at Bangladesh Computer Council (BCC) auditorium at ICT Tower in the city's Agargaon area on Sunday (Oct 17).

Prime Minister Sheikh Hasina is expected to join the inaugural and award giving ceremony of the Sheikh Russel Day virtually as the chief guest at Bangabandhu International Conference Center (BICC) at 9.30 a.m., the state minister said.

The ICT Division and the Sheikh Russel Shishu Kishore Parishad will jointly place floral wreaths at Sheikh Russel's grave at the Banani Graveyard at 6 a.m. and at his portrait in front of respective ministry, division, office, agency and institution at 7 a.m.

Besides, the division will organize a national seminar titled "Sheikh Russel Deepta Joyullas (Sheikh Russel radiant joy, indomitable confidence)" at 3 p.m. and a concert titled "Concert for Peace and Justice" at 6 p.m. at the BICC on the day. Law Justice and Parliamentary Affairs Minister Anisul Huq will join the concert as the chief guest.

A Milad and Doa Mehfil will be organized at Shishu Academy Mosque at 1.45 p.m. while a photo exhibition will be arranged at Sheikh Russel Gallery of the academy at 2 p.m.

To mark the day, Bangladesh Awami League will place floral wreath at the graves of all martyrs, including Sheikh Russel, of the Aug 15 carnage in 1975 in the city's Banani graveyard at 8 a.m. Subsequently Fateha, Milad and Doa Mehfil will also be held by the party members there.

Marking the day, a discussion will be held at 3:30 p.m. on Oct 19 (Tuesday) at Awami League central office in the city's Bangabandhu Avenue area. Prime Minister and Awami League President Sheikh Hasina will preside over the discussion through videoconferencing.

Awami League General Secretary and Road Transport and Bridges Minister Obaidul Quader, in a statement, on Sunday urged party leaders, workers, supporters and people of all walks of life to observe the birthday of Sheikh Russel following the health rules. He also urged the party units and its associate bodies across the country to observe the day through various suitable programmes.

The day also will be observed at Bangladesh missions abroad while different dailies will publish supplements highlighting the significance of the day.

The national implementation committee has requested all to spread the e-posters widely in electronic, online and social media on behalf of the committee to celebrate the birth centenary of Father of the Nation Bangabandhu Sheikh Mujibur Rahman.