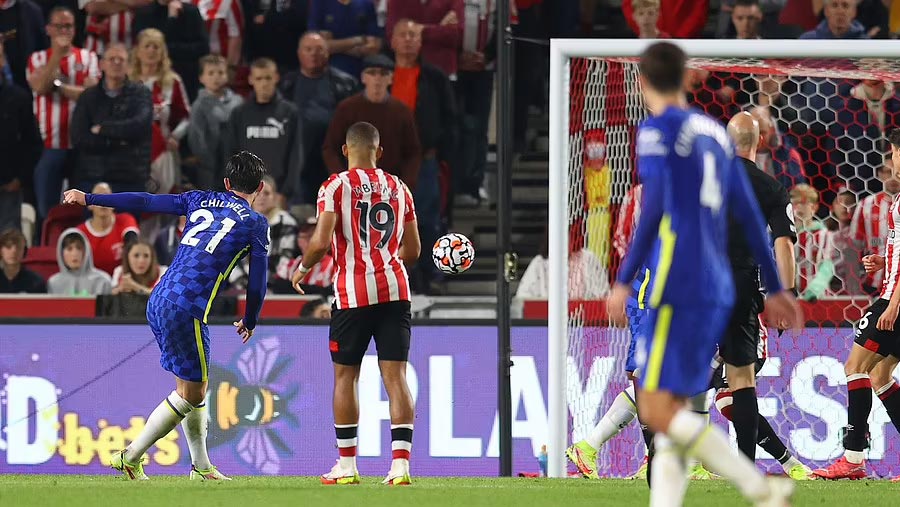 Chelsea saw off a spirited Brentford side 1-0 at Brentford Community Stadium in the Premier League on Saturday (Oct 16) evening.

Chelsea survived a second half onslaught as Ben Chilwell's goal sent them back to the top of the table.

Chilwell gave the visitors a first-half lead but Edouard Mendy kept the Bees at bay to earn Thomas Tuchel's side a hard-fought victory.

Brentford came close to opening the scoring on 21 minutes when Bryan Mbeumo hit the post, and Chelsea raced up the other end and had the ball in the net 11 seconds later.

Fortunately for the Bees, Romelu Lukaku had strayed offside before converting from eight yards.

However, Chelsea took the lead on the stroke of half time when the ball dropped kindly to Chilwell at the edge of the box and he made no mistake with a thumping strike.

Brentford rallied after the break and Mbeumo was denied by the woodwork again, while Edouard Mendy thwarted Ivan Toney, Saman Ghoddos, Pontus Jansson and then Christian Norgaard with an acrobatic save.

Chilwell started the season kicking his heels on the sidelines.

However, the England left-back is certainly doing all he can to impress his boss.

He scored in his first Premier League outing of the season against Southampton last time out and was on target again as he got the nod ahead of Marcos Alonso for the second successive match.

It was Chilwell's third goal in as many league games for the Blues – as many as he has scored in his last 33 games across all competitions.