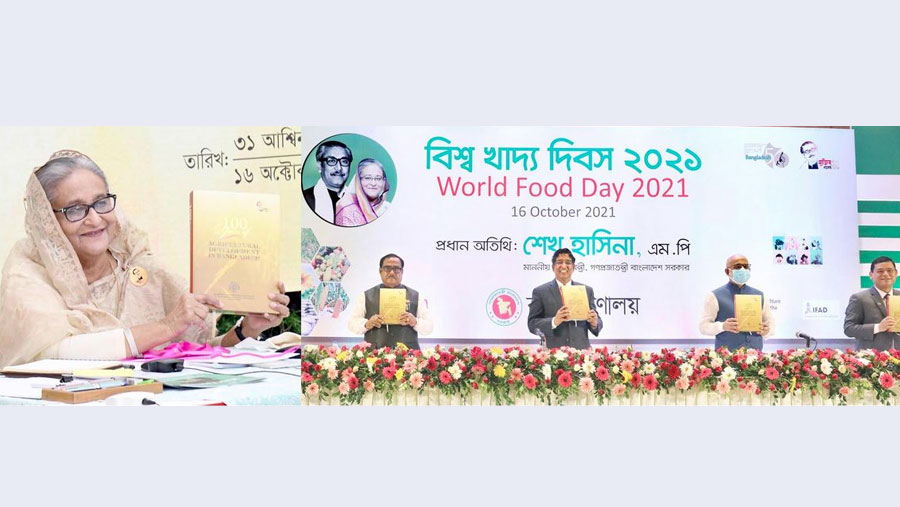 Prime Minister Sheikh Hasina on Saturday (Oct 16) urged all not to waste food saying food was being wasted in many countries while many nations were suffering from food shortage.

"Don't waste food," she said in a virtual address from her official Ganabhaban residence coinciding with the World Food Day stressing the need for finding ways to recycle surplus food to evade wastage, local media reported.

Sheikh Hasina said many nations were exposed to food shortage while some were wasting it. The premier simultaneously called for continued research to boost food production in the country. She also put importance on the research that whether other needs can be met by the excess food.

Hoping that Bangladesh will never face any scarcity of food in future, she said research on food production cannot be halted in any way as her government has been prioritizing it since assuming power.

Sheikh Hasina said, "Research has to be continued as the production capacity of newly invented seed may gradually decrease. That's why research has to be kept running. Everyone has to put concentration on it."

She said the country's scientists have achieved success in the research of inventing different varieties of drought, salinity, water-logging, severe winter or heat-tolerant paddies and this trend has to be continued.

She added, "I think our agricultural scientists are the best scientists in the world and I expressed my gratitude to them."

The PM said her government will build a hunger-and-poverty-free Bangladesh as dreamt by Father of the Nation Bangabandhu Sheikh Mujibur Rahman where all the fundamental rights of people such as safe food, nutrition, education, residence etc will be ensured.

She went on saying, "In fact, when Awami League was in power, North Bengal became Manga (famine) free and it will remain Manga free... But, we have to make sure that none can bring famine in the country through conspiracy."

She said that they will keep their work running to ensure food production and meet nutritional demand of people. Sheikh Hasina urged all concerned to work in this connection. She also reiterated her call to all to put attention on cultivation so one inch of land is not remained fallow.

She said many countries in the world have scarcity of food during the Covid-19 pandemic but Bangladesh never wants to see it.

With Agriculture Minister Dr. Muhammad Abdur Razzaque in the chair, Senior Secretary of the Ministry Md. Mesbahul Islam delivered the welcome speech. Fisheries and Livestock Minister S M Rezaul Karim and Food Minister Sadhan Chandra Majumder also spoke as special guests. A documentary on agriculture and food production was screened at the event, organized by the Agriculture Ministry in the city's InterContinental Hotel.

The World Food Day 2021 was observed in the country as elsewhere in the world with the theme "Our actions are our future – Better production, better nutrition, a better environment and a better life".

The PM introduced Bangabandhu Dhan-100 (Bangabandhu Paddy 100) through unveiling a portrait of Father of the Nation Bangabandhu Sheikh Mujibur Rahman created with paddies. She also unveiled the cover of a book "100 Years of Agricultural Development in Bangladesh".

The PM said in 1973 Bangabandhu formed the “National Agricultural Award Fund,” while in the constitution he guaranteed the emancipation of peasants and workers, the provision of basic necessities to the citizens, the development of public health and the nutritional status of the people along with rural development and the agricultural revolution, and the preservation and development of the environment and biodiversity.

She said the Father of the Nation wanted to introduce integrated/collective farming in a cooperative system.

“Bangabandhu wanted rural development through the introduction of special farming system alongside agricultural development and he wanted collective farming in every village and the distribution of crops to the owners, workers and village funds,” she said, adding, “If his (Bangabandhu's) vision would have been materialized, Bangladesh emerged as a developed nation 40 years ago.”

Sheikh Hasina said due to Bangabandhu’s efforts, Bangladesh became a member of FAO in 1973. As he adopted the first five-year plan, about 5 percent annual growth was achieved in the agricultural sector.

She said following the footsteps of Father of the Nation Bangabandhu Sheikh Mujibur Rahman after assuming power in 1996, her government started adopting and implementing plans extensively giving special emphasis on the development of the agricultural sector.

For the first time, she said, they formulated “New Agricultural Extension Policy 1996” and “Agricultural Policy, 1999”. “As a result of our various initiatives in agricultural research and development, we’ve achieved food self-sufficiency by tackling the food shortages of the past,” the premier said.

Sheikh Hasina said in the last 13 years, they’ve made huge progress in the agriculture sector by ensuring use of digital technology in farming.

The government has made arrangements to exchange information with the farmers through Krishi Batayan, Krishak Bandhu Phone Service (3331), Krishaker Janala and Krishi Call Center (16123).

In addition, the government has provided agricultural input assistance cards to about 2.10 crore farmers, out of which 1 crore 2 lakh 70 thousand 143 people are getting benefits by opening bank accounts at Tk 10, she revealed.

Mentioning that her government is emphasizing on agricultural product processing and value chain management, Sheikh Hasina said since 2009, 655 improved yielding and adverse environment tolerant varieties of crops and 591 technologies have been developed alongside arranging the crops according to the climate and soil suitability.

She said they have further increased allocation for agricultural education and research and as a result, agriculture scientists are rapidly moving towards the use of 4th Industrial Revolution technology in the agricultural sector.

The PM said their efforts have made unprecedented progress in raising livestock such as cows, goats, ducks, chickens. In the last 12 years, the production of animal protein, milk, meat and eggs has increased 5 times, 7 times and 4 times respectively.

At present, she said, the country is able to produce surplus food.