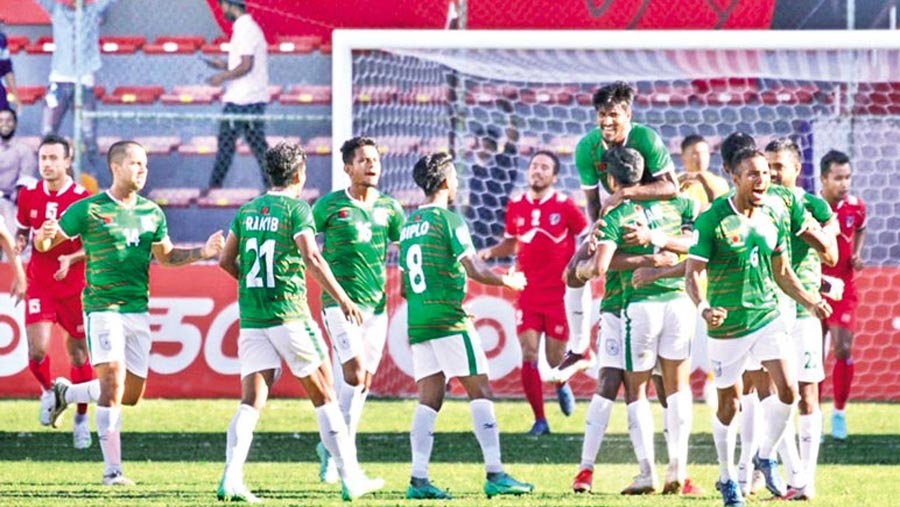 Bangladesh's hope of playing the SAFF Championship final ended when Nepal, came from behind, forced Bangladesh to play 1-1 draw in the crucial match of SAFF Championship held at National Football Stadium in Maldives on Wednesday (Oct 13), reports said.

Despite taking early lead, Bangladesh were denied their victory when Nepal staged a fight back in the crucial moment scoring a goal from a penalty booking their ticket of final of the championship.

The Himalaya Kingdom now will play the final match against the day's second match winners' either defending champions India or host Maldives.

The final match of the tournament will take place on Oct 16 at the same venue.

With the day's outcome, Nepal secured seven points from three matches to move to the final while Bangladesh collected five points playing the same number of matches.

It was the do or die match. In this do or die match for both the teams, Bangladesh had no alternative way but to win the match to go to the final, however, Nepal needed only one point to go through. The Bangladeshi supporters who came to support the Bangladesh team, were eagerly waiting to celebrate the moment but their joy turned to nightmare when Bangladesh conceded the goal two minute before the stipulated time.

There was a festive atmosphere prevailing at the whole stadium as many expatriate Bangladeshi supporters came to support the Bangladesh team. Holding high the Bangladesh flags they chanted 'slogan' 'Bangladesh', 'Bangladesh' from the big bowl. The boys in red and green also did not dismay the crowds as Suman Reza scored the goal in the beginning of the match.

Captain Jamal Bhuiyan took a free kick from the left side of the D-box came in front of Sumon Raza after defecting an opponent player and Reza perfectly sent the ball home with a close header giving Bangladesh a deserving lead in the ninth minute.

Nepal came close of scoring in the 14th minute when Rohit Chand, despite standing at a vantage position, failed to score off a close pass from Gautam Shrestha.

Nepal's had a good chance to level the margin in the 45+1st minute when Ayush's header went a little wide from the pole off a cross from Rohit.

After the break, following a counter attack in the 55th minute, Suman Reza ran down with his solo effort and took right footed shot from close range but Nepal custodian foiled the attempt brilliantly.

Nepal desperately tried to stage a fight back in the match. In the 60th minute Anjan Bista took a brilliant volley but the ball went little wide from the pole.

Three minutes later, Bangladesh again got a chance to double the lead. Following a free kick from Saad, Ibrahim took a header from the close range, but it sailed harmlessly over the cross bar.

Nepal finally staged a fight back in the match in the 88th minute from a penalty. Midfielder Anjan Bista converted the spot kick with a perfect finishing.

Bangladesh's dependable custodian Zico, who was shown direct red card for handling the ball outside the box in the 78th minute, was brilliant under the bar as he foiled number of opponents attacks.