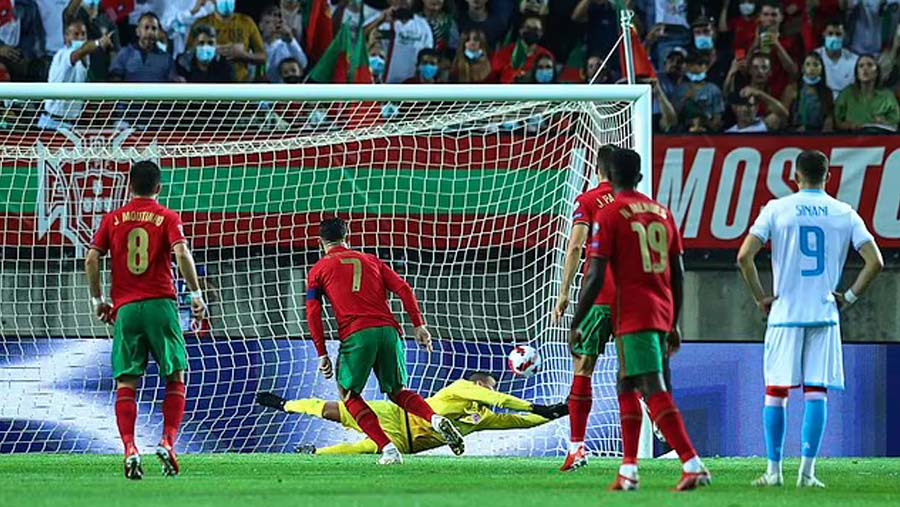 A Cristiano Ronaldo hat-trick helped Portugal stroll to a 5-0 win over Luxembourg in World Cup qualifying Group A on Tuesday (Oct 12). The victory ensures Portugal remain a point behind group leaders Serbia, who moved onto 17 points with a 3-1 home win over Azerbaijan, and boast a game in hand as well as superior goal difference with two rounds of matches remaining.

A 58th career hat-trick from Cristiano Ronaldo helped Portugal stroll to a 5-0 home win over Luxembourg in Group A of World Cup qualifying on Tuesday (Oct 12).

Victory ensures Portugal remain a point behind leaders Serbia, who moved onto 17 points with a 3-1 home win over Azerbaijan, with a game in hand and superior goal difference.

Portugal had the game all but won within the first 18 minutes.

Ronaldo struck twice from the penalty spot before his Manchester United team mate Bruno Fernandes made it three as he fired in following good work from Bernardo Silva.

The forward then missed two gilt-edged chances either side of the break as he sought a third, before being denied a spectacular hat-trick goal when Anthony Moris kept out his acrobatic overhead kick.

Portugal did not have to wait long for their fourth, however, as midfielder Joao Palhinha headed in from the resulting corner with just over 20 minutes to go.

Ronaldo was not to be denied as the hosts pushed on, netting three minutes from time with a header from close range.

Next month Fernando Santos's Portugal side travel to Ireland before then hosting Serbia in what could be a winner-takes-all fixture to qualify for the 2022 World Cup in Qatar.