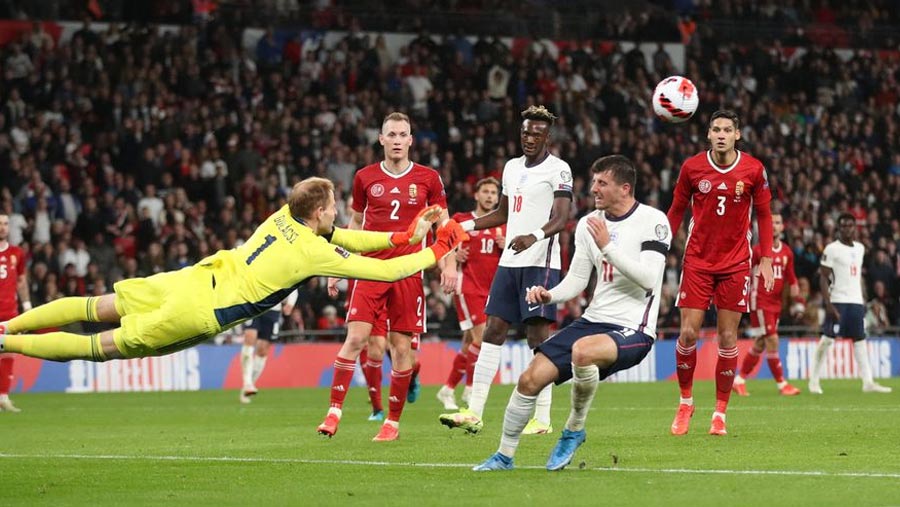 England took another, somewhat faltering, step towards 2022 World Cup qualification when they drew 1-1 with Hungary at Wembley on Tuesday (Oct 12) and are now three points clear at the top of Group I with two matches remaining.

England's path to the 2022 World Cup hit an unexpected stumbling block when they were held to a draw by Hungary in a qualifier Gareth Southgate called a "big disappointment".

The game was marred by crowd violence between Hungary fans and stewards and police.

Southgate's side are still in pole position to reach Qatar but this was a disjointed display despite England taking on the Hungarians with an attacking line-up.

The early stages at Wembley were overshadowed by ugly scenes involving Hungary fans, who jeered England's players while holding up a banner protesting against taking the knee before clashing with police and stewards.

In a subdued atmosphere and after a semblance of order had been restored, Hungary took the lead in the 24th minute when Luke Shaw was penalised for a high challenge on Loic Nego and Roland Sallai sent Jordan Pickford the wrong way from the spot.

England were level before half-time, John Stones turning in at the far post after Tyrone Mings and Declan Rice touched on Phil Foden's free-kick.

Hungary then survived in relative comfort, Harry Kane's struggles for form summed up when England's captain was substituted even though they were searching desperately for a winner.