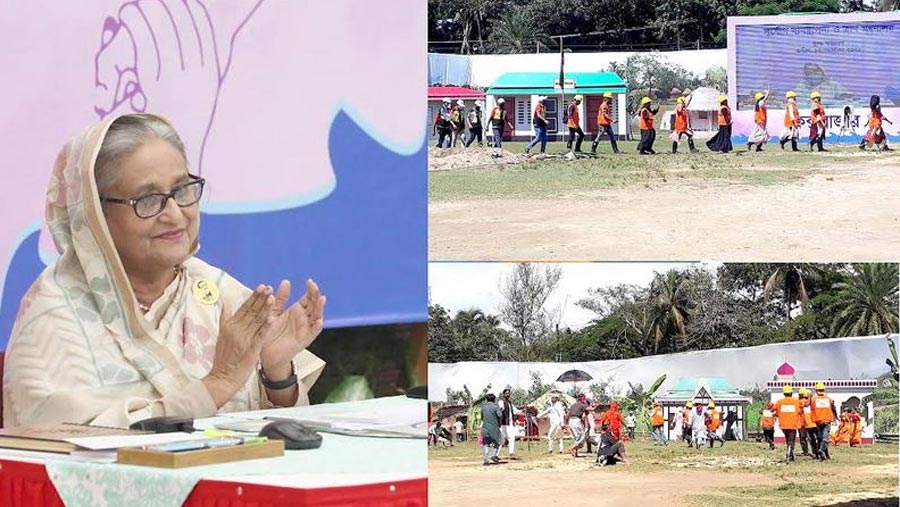 Prime Minister Sheikh Hasina on Wednesday (Oct 13) vowed to continue the country's development spree whatever risks come, calling all to act cautiously keeping in mind the dangers of disasters.

The PM said this while addressing a function marking 50 years of the Cyclone Preparedness Programme (CPP) and the International Day for Disaster Risk Reduction (IDDRR), from her official Ganabhaban residence in Dhaka through a video conferencing, local media reported.

She hoped that these units will help CPP accelerate disaster management work.

The PM said Bangladesh is becoming as an ideal country to counter the disasters in the world due to the government's tireless efforts following footsteps of Father of the Nation Bangabandhu Sheikh Mujibur Rahman.

She called upon all concerned to work accordingly to uphold the global dignity of Bangladesh as a disaster resilient country.

State Minister for the Ministry of Disaster Management and Relief Dr. Md. Enamur Rahman and its Secretary Md. Mohsin spoke on the occasion from Osmani Memorial Auditorium in the capital.

PM's Principal Secretary Dr Ahmad Kaikaus moderated the function from the Ganabhaban while local public representatives including lawmakers, government officials and others got connected to it from the Muktijoddha Math, Cox's Bazar end.

On behalf of the premier, the state minister for the Ministry of Disaster Management and Relief distributed "lifetime honorary medal" to three best organizers and six volunteers, including three women, for their outstanding contribution to the field of disaster risk management.

Bangladesh is observing the International Day for Disaster Risk Reduction with the local theme "Work together for disaster risk reduction" in line with the global theme for the 2021 edition, "International cooperation for developing countries to reduce disaster risk and disaster losses."

The premier later witnessed a cultural programme that included a brief drama on disaster preparedness, staged at the Cox's Bazar end.

A video documentary on 50 years of CPP: Bangabandhu to Sheikh Hasina was also screened at the function.

Highlighting various initiatives taken time to time by her government to reduce the risk of disasters, the PM said they have been doing their part while the people would have to do their part to this end.

“People of our country need to be careful and take some measures accordingly.  While constructing houses, offices, and business establishments you have to keep in mind that disasters such as fire, storm and flood can strike any time. So, everyone should follow the building code while constructing those to stay away from the risks,” she said.

She added: “We are doing whatever necessary (in this regard) from our part.”

The premier also called upon all to remain alert about the man-made disasters referring to BNP’s arson attack (in 2014 to thwart the national election).

Mentioning the remarks of the then Prime Minister Khaleda Zia in parliament about the death figure of 1991 cyclone, the premier said Khaleda Zia told the parliament that  "The 1991 cyclone did not kill large number of people in the coastal areas."

Sheikh Hasina said, "I do not want to hear any such baseless words regarding the tragic incident of 1991 cyclone."

She urged  all concerned to be careful and make others aware of the risk of disasters.

Sheikh Hasina, also President of the Awami League said that they first stood beside the people after the 1991 cyclone.

The PM again assured the people to stay beside them during their need, saying, “Awami League has always remained beside the people. Its leaders always stand beside the people no matter who comes or not. You people have seen the leaders and activists of Awami League Swachchhesebak League, Jubo League, Chhatra League, and Krishok League to come forward to help the masses during the Coronavirus period by risking their lives. We do not see any one else to come forward.”

The PM mentioned the various measures taken by her government such as giving cash incentive to the people and businessmen as well as, relief materials to the masses, providing treatment facilities to the people, purchasing vaccines to minimise the hardship of the people and keeping the wheels of the economy turning.

She said her government has started the mass vaccination campaign with a target to bring 80 percent of the total population under vaccination for which they are purchasing huge quantity of the Covid-19 vaccine.

Despite the fact, the PM called upon all to follow the health protocols accordingly as anyone can become infected with coronavirus even after taking the vaccine.

The PM came up with the opinion that the inclusion of  women in the CPP activities has made the organization more effective and said, “We will always take the measures required to free the people from the risks of disasters.”

Her government has taken all the initiatives to ensure security against disasters and basic needs of the people following the footprints of the Father of the Nation and working with various plans to make Bangladesh a developed and prosperous country, she said.

Sheikh Hasina said her father Bangabandhu Sheikh Mujibur Rahman established the CPP immediately after the Liberation War mainly to protect both lives and livelihood from natural disasters like cyclone; As Bangabandhu witnessed the sufferings of the masses in the 1970 cyclone that claimed lives of 10 lakh people due to unpreparedness of then East Pakistan government.

Following the footsteps of the Father of the Nation, the Awami League government had taken various measures after coming to power in 1996 for which it had successfully handled the country’s most prolonged 1998 flooding which lasted for two and a half months and 70 percent of the land across the country went under water.

As part of the disaster preparedness, the PM said her government plans to dredge some 510 km rivers by 2022 alongside implementing various projects in building water reservoirs, excavation of 4886km canals, construction and repairing of flood-control dams.

Besides, necessary laws including Disaster Management Act, 2012 and Strategic Action Plan 2015 have also been enacted and are being implemented, she said, adding that capability of the concerned institutions have also been strengthened to a significant extent to face the disasters.