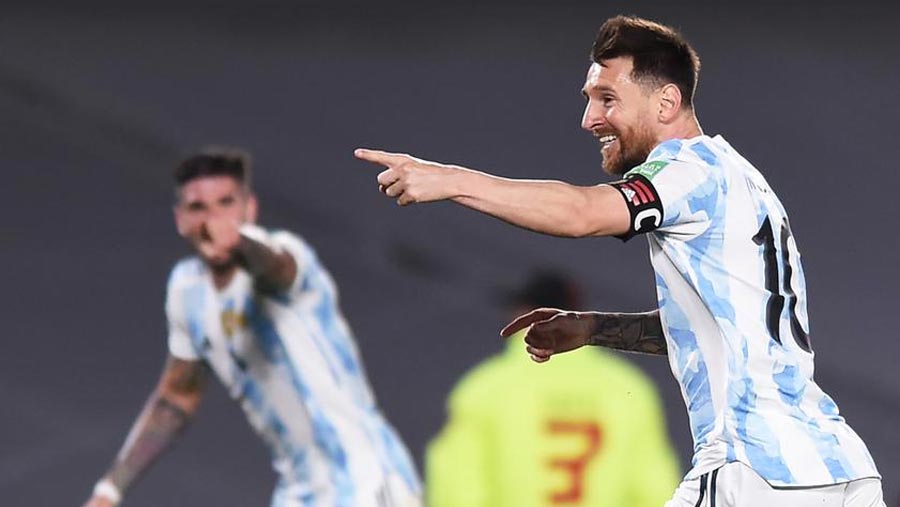 Lionel Messi was among the scorers as Argentina beat rival Uruguay 3-0 on Sunday (Oct 10), hours after Brazil’s run of consecutive wins in South American World Cup qualifying ended in a 0-0 draw with Colombia.

Brazil leads the qualifying competition with 28 points from nine wins and the draw, six points clear of second-place Argentina after 10 matches. Brazil’s tally so far would have been enough to qualify for all World Cups directly since 2002.

It was a good day for the bottom two teams in the group as Bolivia beat Peru 1-0 and Venezuela defeated Ecuador 2-1.

Goals from Darwin Machis and Eduard Bello either side of a penalty from Enner Valencia were enough to give Venezuela a rare win.

In the late match, goals from English-born Ben Brereton and Mauricio Isla gave Chile, who had Charles Aranguiz sent off, a 2-0 win over Paraguay, who had Omar Aldieret dismissed.

Ecuador remains in third spot with 16 points, marginally ahead of Uruguay based on the number of victories. Colombia is in fifth place with 15 points. All three have already played 11 matches.

The top four teams earn direct entry to the World Cup in Qatar next year. The fifth-place team can still qualify via an inter-continental playoff.

All teams in South American World Cup qualifiers will play again on Thursday.