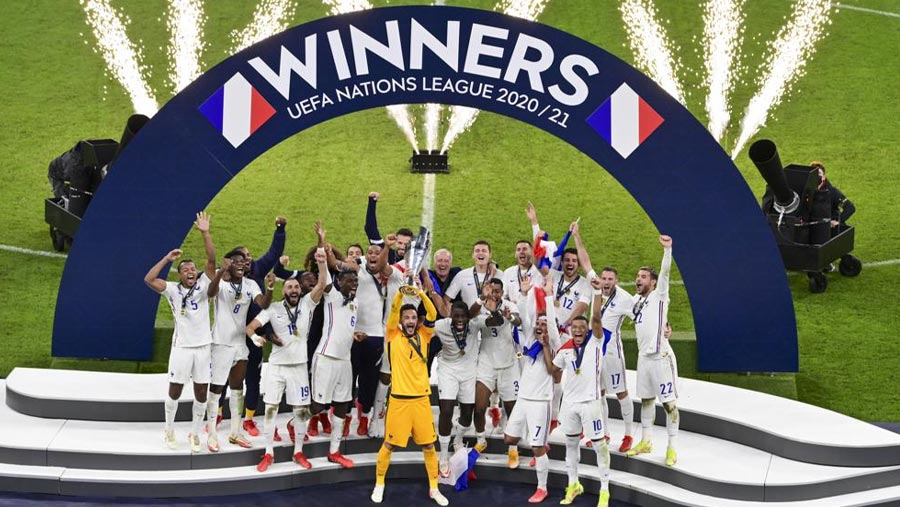 Kylian Mbappe scored late as world champion France came from behind to win the Nations League with a 2-1 victory over Spain in the final on Sunday (Oct 10). Mbappe netted with 10 minutes remaining as France was again forced to fight back, just as it had done in the semifinals against Belgium.

France won the Nations League on Sunday (Oct 10) after coming from a goal down to beat Spain 2-1 in Milan.

Karim Benzema and Kylian Mbappe struck to claim the title for world champions France after Mikel Oyarzabal put Spain ahead midway through the second half.

The win will ease some of the pain created by an early exit from Euro 2020 at the hands of Switzerland and highlighted just how powerful France are going forward.

Les Bleus came out on top of a match at the San Siro which came to life after Oyarzabal slid home the opener in the 64th minute.

As well as the two goals from their superstar attackers, France had other opportunities to score through Mbappe before a frantic finish in which Spain launched an assault on the French goal.

Didier Deschamps can thank Hugo Lloris the match didn’t go into extra-time after the France captain pulled off a fine stoppage time save to deny Yeremi Pino a late leveller.